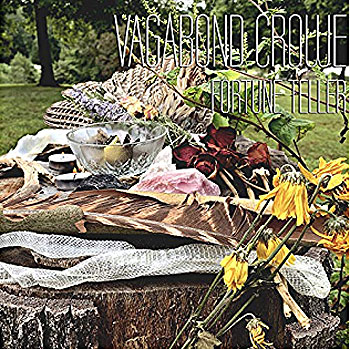 Your website says that the songs on Fortune Teller were “written in the midst of turmoil and life change.” What can you share about that?
The songs were written over the course of a year. During that time I was going through a divorce and breaking ties with toxic members of my family. I felt alone in a lot of ways, and I didn’t know what was next for me in life. During that time, I was searching for who I was and trying to re-frame my worldview. Fortune Teller‘s fifth track, “Calling Me Home” probably should have been put at the end of the album, because it’s a picture of my future and the peace I’ve found in my new life.

Do you find that writing songs is a form of catharsis?
For sure. Songwriting has been my coping mechanism since my childhood. In a song, I can say whatever I want, however I want without any judgment or concern. For example, the last song on the album, “You’re A Spirit,” was written right after an intense argument with someone that I care very deeply about. It was a way for me to say, “Even if I lose you, I’m still glad that I had the fortune to know you and have you in my life.”

Tell me about your songwriting process.
All of the songs on our recent album release are extremely personal. It has always seemed that my process was born out of emotion or experience. It’s never been a systematic thing, or really even something that I could do with someone else. But now that we play as a full band, everyone has input on the instrumental structure of the songs; I want the creative input from everyone in the band.

What’s your primary goal as a songwriter?
I am aim to connect with people. And I hope that the music we put out there is something that can comfort people and help them to feel less alone in some small way.

From your perspective, what are the hallmarks of a great song?
A great song is one that digs down into your soul and reminds you of who you are; it’s something that wakes you up. Whether it’s a song from your childhood or something brand new, if it moves you to feel – happy, sad, angry, regretful or hopeful – then the song did its job.

You recorded a cover of Paul Williams’ “Rainbow Connection.” What’s special to you about that song?
No one else has asked us about that recording! I recorded that song at the request of the gentleman that funded our album, Josh Thigpen; I understand that he has a lifelong connection to the song. That was his only request, and I was happy to do it for him. I also think that he thought it would be fun to have me sing something “innocent,” since most of my lyrics tend to be on the darker side.

How does the band’s onstage/live music differ from the studio recordings?
Well, right now the live experience is much different. Vagabond Crowe is now a five-piece band. On Fortune Teller you’ll hear something more Americana, but we’ve since morphed slightly, into a folk-rock band. Of course we still play the songs from the album, but the fiddle has been replaced by lead guitar and harmonica. We’re headed in a new direction, but we’ll always have our roots in the folk sound.