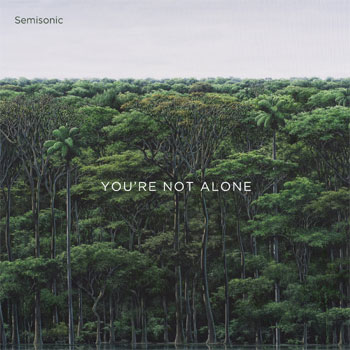 When listeners hear new songs like the soaring title track and the riffing “Basement Tapes,” they may find themselves thinking that Semisonic has picked up right where it left off in 2001. And that idea hung over Wilson and his bandmates as they contemplated the group’s reactivation. Wilson says that as he discussed the future with Slichter and Munson, “there was an unanswered question floating over us: ‘How are we going to update our sound?’”

But they didn’t labor too long over the idea. “I feel like I’m as updated as I want to be,” Wilson says. “So I didn’t have any hunger for updating Semisonic. I didn’t need to feel like I want to prove anything.” He says that when he and his bandmates get together to play, that’s what Semisonic sounds like. “That’s unique,” he says. “Nobody else sounds like that.”

When the three got together to record You’re Not Alone, they kept that in mind. And Wilson recalls thinking, “We don’t need to work hard to recapture anything, either. We’re just gonna have to hear these songs, pick our first impressions and see what it sounds like when we play them with spirit and joy.” And that, he says, is what they did.

Slichter observes that for Semisonic, the process of recording music for release seems less forced that it did in the old days. “One thing that all of us realized – something that all artists get to – is that sometimes simpler is better,” he says. “Back in the late 90s and early 2000s, when we were making music, we would really try every single idea.”

But at the end of the process, they often found that their original, unadorned ideas worked best. “And now, we’ve sort of internalized that for ourselves,” he says. “Because we don’t live in the same place, when we get together we have to make the best use of our time. And that further inspired us to say, ‘Okay, let’s just take the straightest line we can from point A to point B. And we’ll see what happens.”

While Semisonic enlisted outside producers for its first two albums – Paul Fox and Nick Launay, respectively – they self-produced All About Chemistry. And they handled their own production duties once again for the new EP. For his part, Wilson says that he has learned a lot from other producers. His 2007 solo debut Free Life was produced by Rick Rubin. He calls that experience “the craziest several-year-long masterclass you would ever want to have.” And Mike Viola – best known as the vocalist on the theme song from That Thing You Do! – co-produced Wilson’s third album, 2017’s Re-Covered.

“I learned a ton of things from Mike,” Wilson says. One lesson was knowing when you’ve got it right, when to stop trying. “It’s so precious to have somebody in your corner, saying, ‘No, we’re not gonna beat that. That’s got the vibe; let’s stick with that.’”

Producing yourself affords freedom, but Slichter emphasizes that it involves a great deal of work, some of which isn’t musical at all. “When you’re in the band, you sort of think of the producer as the guy with the sort of authority,” he says. Slichter paints a word picture: “He’s sort of sitting in a chair with a big star on it. He’s got a megaphone in his hand, and he’s saying, ‘Lights, camera, action!’ But that’s not really it.”

Slichter says that the trio’s collective experience prepared them for handling production on You’re Not Alone. “Dan and John especially have experience as producers,” he points out. Munson co-produced both albums by The Twilight Hours and some of the releases from his jazz trio, The New Standards. “And Dan is, in fact, a Grammy-winning producer,” Slichter adds. “All of us are more experienced makers of art now, and I think that all of that shows up in our EP.”

“Being in a band is a very collaborative experience,” Wilson says. “And it’s like living in a bubble, especially if you have success. Your bubble flies around the world, but you still live in a bubble.” He notes that inside of that bubble, there’s a potential – if not a necessity – to develop a deep level of trust.
“From that experience, I really learned how to be a collaborator,” he says. Going forward to work with others outside of Semisonic, he sharpened his own sense of what kinds of songs would excite them.

“And having kind of flown that craft during the intervening time when Semisonic wasn’t recording, now I go back into my band with that similar mentality,” he explains. “Now we’re collaborators. What do you think? How does it sound to you? What have we missed? Is there any idea that we forgot to have?” He says that it’s all about “artistic thoroughness, passion and trusting the other person to have the right idea.”

Even though Semisonic was – albeit for a brief moment – one of the biggest band in the world, Slichter doesn’t hold unrealistic aspirations for You’re Not Alone to repeat the success of “Closing Time.” “I don’t think any of us expects any huge financial windfall from our EP,” he says. “I just want it to be something that we’re really proud of. And we are; We’re really excited about it.”
Looking to the future, Slichter says, “The closest thing I have to a concrete goal is that enough people like the EP [so] that we can go around and play some shows. That won’t happen until after the pandemic, but I’m still hopeful.”

Dan Wilson shares that guarded optimism. “I hope we’re back to a world someday where a live performance makes sense,” he says. “There’s gonna be a lot of creativity and intense thought put into how to have musical experiences, gatherings that respect the environment we’re in. I’d love to play these songs for people, and I’m pretty sure that we will.”