Re-opening Time: Semisonic Returns with a new EP (Part One) 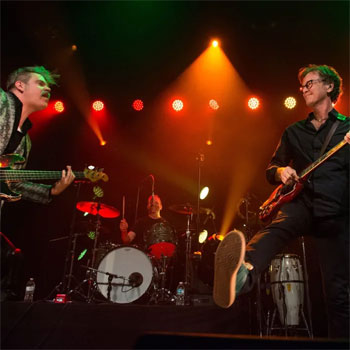 Minneapolis rock trio Semisonic scored big with “Closing Time,” the hit single from their second album, Feeling Strangely Fine. The song – and all of Semisonic’s music – may have been out of step with the prevailing grunge scene, but listeners across the globe instantly warmed to the melodic sounds of the group. “Closing Time” hit the #1 spot on Billboard’s alternative chart, reached the Top 40 in four other countries, and earned a Grammy nomination (Best Rock Song) in 1999. Buoyed by the hit single, Feeling Strangely Fine went Platinum in the U.S., and Semisonic was catapulted to the big time.

But it wouldn’t last. While the band’s third album, 2001’s All About Chemistry, scored positive reviews, sales didn’t approach that of the group’s previous record. The band soon went inactive, and all three members went on to other projects.

Most prominently, songwriter, guitarist and vocalist Dan Wilson pursued a highly successful career as a songwriter and producer. He co-wrote six of the songs on The Dixie Chicks’ (now The Chicks’) 2006 album Taking the Long Way, and the Grammy-winning single “Not Ready to Make Nice” was the group’s biggest hit. In 2011, British vocalist Adele scored her biggest success to date with the album 21; Wilson co-wrote three of the record’s songs. One of those was “Someone Like You,” a worldwide hit single and another Grammy win for the songwriter. He’s also produced artists as diverse as Pink, Engelbert Humperdinck, Céline Dion and Taylor Swift.

After Semisonic went on hiatus, Drummer/keyboardist Jacob Slichter penned a lively memoir, 2004’s So You Wanna Be a Rock & Roll Star, a volume that expanded on his popular road diaries posted online during the height of Semisonic’s fame. Bassist John Munson – whose friendship and musical association with Wilson goes back to the 1980s when both were members of Trip Shakespeare – teamed up with Dan’s brother Matt (also formerly of Trip Shakespeare) in The Twilight Hours; that group released two superb (if little-known) albums, Stereo Night (2009) and 2016’s Black Beauty.

There had been no ugly falling out nor messy musical divorce among the members of Semisonic; the three remained in regular contact, even as Dan Wilson moved to Los Angeles and Slichter relocated to New York City. “I think all of us always expected we would make another record,” Slichter says. “We just didn’t know when.”

Semisonic reconvened briefly in 2017 for a short run of Minneapolis shows commemorating the 20th anniversary of their debut album, Great Divide. They got together again soon to play dates celebrating the 25th anniversary of Feeling Strangely Fine, and again in 2019 for another handful of shows in their native city.

During those 2019 shows, Semisonic debuted at least three new songs, demonstrating that Wilson could still write music that captured the optimistic and catchy vibe of vintage-era Semisonic. Those three tunes – along with two others – appear on You’re Not Alone, the new EP that represents the first new Semisonic studio release in more than 19 years.

On earlier Semisonic releases, the group’s approach was to write far more songs than would be needed, and then to select the very best for the album. And they approached You’re Not Alone in a similar fashion. “We recorded many more songs than actually ended up on the EP,” says Slichter. “But that always means that what we end up with is something we really love.”

Dan Wilson says that realism a guiding principle when he’s writing with or for another artist. “I’m likely to think, ‘Is this a real song? Does this feel like a real point of view? Is it bullshit, or is it real emotions and ideas?’” he explains. “And once I’m happy with that, that’s what fuels me to finish an idea.”

He applies that same thinking to Semisonic’s music, but that presented a problem. “Over the years I would dip my toe in the water and try to write a Semisonic song,” he says. “But when I finished the song, it would always sound like either a Dan solo record or something that someone else entirely would sing. And it was only in late 2017 that I got a feeling of Semisonic in a song that just felt like the real deal.”

Then the floodgates opened. “Once I hit my stride,” Wilson says, “I did my usual thing of writing too many songs!” He ended up with at least 20.

Having written for so many other artists, Wilson has given a great deal of thought to what characteristics make one of his songs right for Semisonic. “I realize that when I’m writing for somebody, I’m really writing for the rhythm section,” he says. And Semisonic’s rhythm section of John Munson and Jacob Slichter has long possessed a style that stands apart from much of what was popular when it began.

Wilson chuckles as he summarizes the defining characteristics of grunge, the rock style du jour at the time Semisonic debuted. “That father-hating, lonely vengeance, dreams of glory vibe,” he says. “Semisonic never did that; we never sounded like that.” Instead, he suggests, his band displayed “a hopeful quality and kind of an openness. We never were portraying someone who was cooped up in their basement, full of anger. We were much more like flower children,” he admits with a laugh.
“And when I was writing [these new] songs for Semisonic, I realized that I didn’t really have to work too hard at that,” he says. “I realized that it’s okay to do that.”

But with 20 songs written – and at least 14 of those recorded – why isn’t Semisonic releasing a full album instead of an EP? Wilson offers multiple reasons. “The 10th, 11th and 12th tracks [we recorded] are good,” he says, but “they didn’t hang together the way the central five did.” And some of the other songs lacked another quality common to many of Semisonic’s best tunes. “They’re songs that I love and I think are really, really special,” Wilson says, “but they just didn’t rock the way these songs do.”