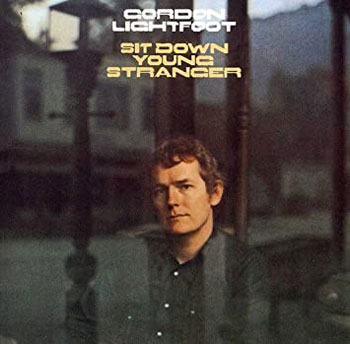 And he had another fleeting concern. All those years had gone by, and then he returns with a simple, unadorned album? “I didn’t want people to think I was getting lazy,” he says with a laugh. Compared to the highly polished East of Midnight, Solo would represent a radical departure. “Boy, I made some slick albums in my time,” Lightfoot says, laughing again. “East of Midnight was one of the best I ever did that way.”

He had largely forgotten about the existence of the demos he recorded at home in 1998. “Here were these tunes; I didn’t recognize them,” he admits. “I had to play them to remember what they were all about.” The sound and character of the shelved solo recordings truly appealed to Lightfoot. He says that Solo “was like a gift. It appeared out of nowhere, out of a mound of gifts that I’ve been moving around with for the last 59 years. But there it was. It got buried in there somewhere.”

The contemplative “Why Not Give It a Try” is vintage Lightfoot; even in its spare voice-and-guitar arrangement, it echoes the gentle melodicism of his biggest hits. The breathy whistling that occupies the spaces where lead guitar breaks might go serves to underscore the you-are-there feel of the recording. “Why Not Give It a Try” and “Oh So Sweet” were both released as singles from Solo.

Lightfoot says that the austere, intimate quality of Solo is what makes it special. “What I like most about it,” he muses, “is that I can actually hear one of my feet tapping on a couple of the takes.” His acoustic guitar playing is solid and expressive, and though his vocals on the album have an offhand, homespun texture, they’re right in line with the up close and personal feel of the record.

After more than a half century as a singer, Lightfoot has almost certainly developed a regimen to keep his baritone voice in shape. Right? Not so, it happens. “I do absolutely nothing,” he admits. “It looks after itself.”

Guitar? That’s a different story. “I practice the guitar a lot,” he says. “I do that while I’m watching sports reruns on TV. I get set up, watch a sporting event – a hockey game or a basketball game – and then I’ll sit there and practice and practice. Really, it’s a great way to practice.”

Reading His Mind
Gordon Lightfoot has had many years to figure out what works for him. And though to listeners in the U.S. he might have seemed an overnight success when “If You Could Read My Mind” became a hit, he had been a recording artist for some eight years. By 1968 he had landed seven songs on the Canadian Top 40, and even scored the #2 spot on Canada’s Country singles chart with 1965’s “I’m Not Sayin’.” In those days, he was known as a songwriter more than a performer.

In the ‘60s, a wide array of artists – Chad & Jeremy, Judy Collins, Richie Havens, Ian and Sylvia, the Kingston Trio, Peter Paul and Mary, Elvis Presley and Marty Robbins among them – covered his material. Lightfoot did play high-profile festival dates, and earned a spot on The Tonight Show Starring Johnny Carson in 1965, but his success remained limited to Canada. As the ‘60s ended, success in the United States seemed out of reach.

That all changed suddenly with “If You Could Read My Mind,” but no one was as surprised as Gordon Lightfoot. “We never had a feel about” it becoming a hit, he admits. “But we did have some interest in certain quarters.” He enjoys telling the story of the one-woman focus group that unintentionally helped launch the single’s stateside success. “I can’t even believe it myself, how they got ‘If You Could Read My Mind’ going,” he says.

Released in April 1970, Lightfoot’s fifth album initially sold about 80,000 copies, but then it seemed to stall on the charts. “Out on the West Coast, where Warner Brothers’ main promotion department was, one of the guys there had his younger brother play it for his girlfriend,” Lightfoot recalls. “They were down for a weekend get-together down in Hermosa Beach or something like that. The kid came back and said, ‘The girl likes “If You Could Read My Mind.”’

He continues the story. “So the promotion guy called a person up in Seattle who could program the record, who could put it on the playlist.” Released as a single in December, “If You Could Read My Mind” started its climb up the chart eight months after it had been released as an album track. “After the guy’s young brother had the girlfriend pick out the single,” Lightfoot says, the incredulity still evident in his voice. “The whole story was so insane!”

Lightfoot wasn’t initially pleased when Warner Brothers changed the album’s title from Sit Down Young Stranger to match the newly-minted hit single’s title, though. “I was so irate about it,” he says, admitting that he “was a bit of a prima donna at that point.” He recalls getting on a plane to Los Angeles.

“I flew to LA and said, ‘Why are you changing the title of my album? What difference would it make?’” A representative from Warner/Reprise’s accounting department quickly set him straight. “Gordon, did you take algebra in high school?” Lightfoot said yes. “Okay,” the accountant continued. “What’s the difference between X and 7X?”

“I got on a plane and turned around and flew back here to Toronto,” Lightfoot says. “And about two months later, they’d sold 600,000 copies. The record was up to number five or something like that.”