The studio gigs kept coming. “I was busy,” Jemmott says. “I was real busy.” But as much as he enjoyed his heavy session schedule, he was starting to burn out. “Duane [Allman] and I wanted to part ways with making records at one point,” he says. “In fact, I think it was probably during the last Wilson Pickett session we did that I decided, ‘Yeah, I’m fed up with this record making shit. I’m just going to do commercials and jingles and get paid, get respected.’” He says that Allman felt similarly. “He said, ‘I’m going to go home and start a band with my brother.’ So, we both went our separate ways then. I went back to New York and just did jingles and commercials basically, except for special projects.”

Back home in New York City, he was offered just such a special project. “King Curtis called me at the end of ‘70, to do this proposed tour with Aretha for the next year,” he recalls. “He knew I didn’t want to go on the road. But I said okay, I would do it because the band was going to be hot. And playing with Aretha was something special.” Captured over three nights in April 1971, a recording from that tour would be released as Curtis’ Live at Fillmore West. In 2005, Rhino Handmade released a limited edition box set from those tapes, Don’t Fight the Feeling: The Complete Aretha Franklin & King Curtis Live at Fillmore West.

The tour lasted from February to July of that year. And it was during a break in April that Jemmott landed another special project, this time for a studio session for poet, musician and proto-rapper Gil Scott-Heron. He played bass on Scott-Heron’s debut album, Small Talk at 125th and Lenox. The record’s standout cut would be the opening track, “The Revolution Will Not Be Televised.” Jemmott says that while the session resulted in an important and groundbreaking recording, cutting the track was “a walk in the park. I came up playing in [Greenwich] Village, just me, my acoustic bass, and a poet playing,” he explains. He says that the Gil Scott-Heron session was a case of “doing things I had done in my formative years, but doing it on a higher level.” 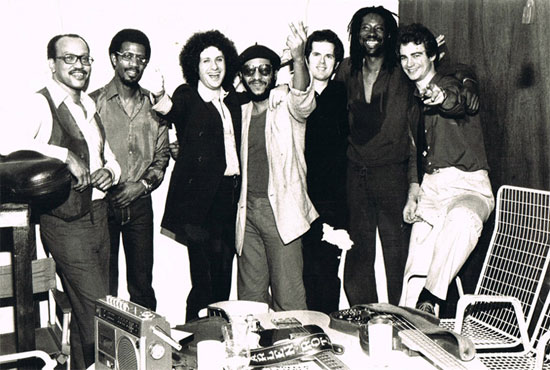 In 1971 Jemmott played on the second collaboration between Les McCann and Eddie Harris, Second Movement. Jemmott was already a big fan of McCann. “He was one of my favorites. He and Cannonball [Adderley] and Horace Silver were into this whole idea of playing more danceable, get-down music as opposed to straight bebop. And he was one of the people who had the magic touch to do that.”

Jemmott was recently reminiscing with McCann about that session. “I was totally intimidated! Him and Eddie Harris together? Oh, man. I had to be on my triple A game to play with them. It was one of the most intense sessions I’ve ever had to do. Les’s sense of timing is just incredible. The way he can just put things in and take things out so effortlessly and seamlessly … it’s awe inspiring.”

Like most of the sessions in Jemmott took part in the ’60s and beyond, that date had the core musicians playing live in the studio. And that affected the way that everyone played. “Horns, strings and vocals would be there during the rundowns,” Jemmott says. “So we were able to hear the full arrangement all at one time; that made us intuitively know how much to play … and what not to play. You could play tastefully knowing that you were playing just one of several parts.”

Jemmott’s memory is sharp, but with the countless number of sessions he’s done over the decades, his recollections of some are lost to time. One of those is his work on Lightning Hopkins tracks that surfaced in the 1990s on an Arhoolie collection, Texas Blues. “There are so many records in my discography,” he says, “I remember being there, but I don’t remember what tracks I did.”

It’s reasonable to expect that Jemmott would have some wild tales from his countless studio sessions. But that’s not the case. He says that most of the singers, musicians and technical people he encountered in the studio “were angels. They don’t want to come in there and screw around.” He says that people didn’t reveal their true personalities. “Everybody’s on their best behavior in the studio. So you don’t really get a chance to what they’re really like, because they’re on studio time. They don’t have time to be getting an attitude; they want to get the work done. They don’t want to get anybody upset.”

He does recount one time when a musician did lose his cool in the studio. And it turns out that musician was Jerry Jemmott. The session was a tribute to Dr. Martin Luther King, Jr., recently gunned down in Memphis. “I was a Malcolm X man,” Jemmott says. “I was pissed off in ’65 when he got killed, but I don’t remember any [tributes] going on. I wasn’t called to do anything.”

In the studio to cut the MLK tribute, Jemmott found himself quite upset. “I was going through a whole series of mental things while they were running it down, asking myself, ‘Why the hell am I here? I didn’t support the cause.’” When the recording light finally came on, he didn’t play. “I packed up my bass and walked out the studio. It was a mental breakdown; I couldn’t take it. That was me as a musician having an emotional episode.”

With that extraordinary exception, such episodes don’t figure prominently in Jerry Jemmott’s story. He would continue to work in the studio for years, and he also launched a solo career in the early ’70s. At that point, health problems were affecting his ability to play. “My playing was so shitty at that particular point, I figured nobody was going to hire me,” he says. “I figured, ‘I better hire myself and be my own boss,’ because the work wasn’t happening, and I wasn’t comfortable playing.”