Jemmott knew how King’s music usually sounded, but he also knew why people booked him as a session bassist. “People usually call me to do something different,” he emphasizes. “So it was a matter of watching his hands. Whatever he did, I did something different. It was always that blues triplet rhythm, and I’d just take it and break it down into either 16th notes or even 8th notes to go against it. And it worked.” The resulting recordings – also featuring Al Kooper, Hugh McCracken, Herb Lovelle and others – make up the second side of King’s studio/live hybrid LP, 1969’s Live & Well.

In 1969, Jemmott worked with another King. His electric bass playing is all over the pair of LPs Freddie King cut for Atlantic subsidiary Cotillion, Freddie King is a Blues Master (1969) and 1970’s My Feeling for the Blues. Today he winces at just how prominent his bass is in the mix for tracks like King’s horn-laden remake of his classic, “The Stumble.”

Due in part to his hearing problems, Jemmott’s intention with the bass has always been about “being felt and not really being heard,” he says. “But the engineers and the producers, they crank it up. When I create a line, it’s not meant to be out front. It’s meant to be supportive. That’s why I picked the bass in the first place. If I wanted to be out front, I would’ve picked to play the horns!”

Jemmott has always liked being in the background. “Not being noticed so much, but still being part of the music: that’s what attracted it to me,” he says. “That was the emotional appeal for me to play the bass.” 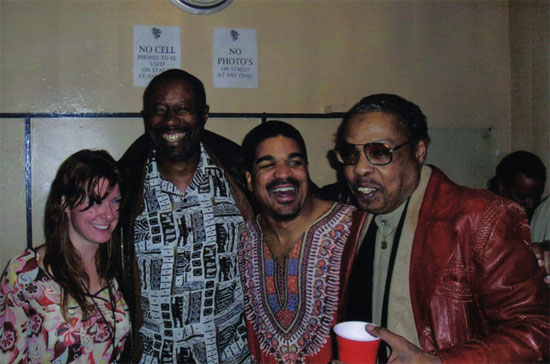 Around the same time, Jemmott played on sessions for Aretha Franklin. In fact he would appear on five of Aretha’s studio albums released between 1968 and ’73. “My sweetheart, my idol,” he says, clearly stirred by memories of the singer. “I was exposed to her when she was singing jazz on Columbia, and I knew she was on fire then. And then, when she signed with Atlantic and put out that string of hits, it was like, ‘Oh, yeah, oh, yeah!’”

Jemmott says that it was “a dream come true to be able to support her cause.” He had been called in on a session by producer Jerry Wexler, who warned him, “You might play, you might not.” The primary musicians were all Muscle Shoals cats, the team who had played on her previous string of hits.

“I got to the studio in the morning, and they were playing this one song,” Jemmott recalls vividly. “But something was misfiring. I couldn’t understand why they couldn’t get into her groove; she played the same thing over and over again, and they still couldn’t match it up to make the song come alive.” The problem, Jemmott realized, was that they had the style all wrong. “They were trying to make it into rhythm and blues, but I heard right away: she was singing country.”

After a few hours of the band’s fruitless efforts, Jemmott says he was approached by Wexler. “’Go in there and see what you can do,’ he said. I played a country bass line. Tommy [Cogbill] picked up a guitar and started playing bluegrass. Everybody got it right away. And two takes later it was over.” The song cut that day was “Think,” a massive hit (#1 R&B, #7 pop) and Aretha’s seventh Top 10 hit in the U.S. “If you listen to it,” Jemmott says, “you’re hearing straight-ahead country.”

Around the same time, Jemmott was called for a Wilson Pickett session, to cut a song called “Deborah,” released in 1968 as an album track and the b-side of “I’m a Midnight Mover.” He recalls the session, led by producer Arif Mardin. “Somebody didn’t show up on a date in Atlantic, so I got a call at ten in the morning to come down to the studio. I got there about 11:30 or so, and there were like 20 musicians waiting for the bass player to show up!” He listened to the players do a quick rundown of the song. “I read the chart, and I figured I could do something with that. They released the song the very next week in Italy.”

Pickett was pleased with Jemmott’s work. “The next year I got a call to go down to Muscle Shoals and do the Hey Jude album,” he says. “I love the song; I love the Beatles’ version of it. Basically, I just funked it up from what they did. I kind of incorporated the vocal leads into my bass part as we got into the rideout, to take it to another level.”

Jemmott explains that his process of creating the right bass part – as he did on “Hey Jude” – is a mix of planning and spontaneity. “It happens very quickly,” he says. “It’s premeditated, knowing that it’s going to work. But I don’t get the idea until I’m faced with what’s put in front of me in that moment. I come up with a solution rather quickly, and sometimes it grows as I go along. Things just happen.”

He says that for him, music is a very organic process, one he likens to baking. “You have the ingredients in front of you, but you have to put them in a certain order. The temperature of the oven has to be right, the ingredients have to be perfect to have the cake come out without falling out and flopping. And music is much the same way, only it happens in over a period of time, not like baking for an hour. The beginning, middle, and the end have to happen in three minutes and 20 seconds. You have to see all this as you’re doing it and realize you have to save something for the end, have something for the middle, and be able to make it interesting at the beginning [so that people] listen and are engaged enough with it to stick around.”