Boom Boom! More from my Conversation with Pat Travers

The following is a companion piece to my Pat Travers feature found here.

Rock fans of a certain age remember Pat Travers’ hit era. The Canadian guitarist scored FM radio hits with “Boom Boom (Out Go the Lights)” and “Snortin’ Whiskey,” both in the late ’70s. But he’s remained active since then; his catalog features nearly 40 albums, many of which are live sets that showcase the guitarist and his band in their natural element. But his studio work remains impressive as well; his latest album recasts classics from the postwar jump blues and swing era into rock idiom. I spoke to Travers about that record, Swing!, the next album already in progress, and what he likes and doesn’t like about touring. 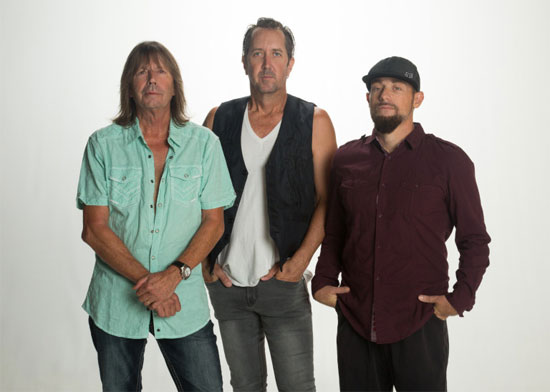 I reviewed the Swing album a few months back; I really liked that album. I appreciate when a rock artist helps remind listeners that jump blues and swing are a kind of missing link between big band and rock. Tell me about the inspiration for making that album.

Well, I’ve always had a kind of an interest in different time periods of music, so a few years ago I did an album [Travelin’ Blues] where I covered blues songs from the 1920s. And I discovered that what was called the blues then was completely different. It’s kind of a fluid term. But I was interested in what was going on with the artists and their marketing and the times and their situations and stuff. That was interesting.

And I actually started thinking about this doing the ’40s big band stuff when my wife had the ’40s channel on XM on. So I thought about it for a little while and I kind of put it aside. But then Cleopatra asked me if I wanted to do an album for them. And I at that point didn’t want to hand over a totally original album, so I thought about doing the ’40s thing, and they were happy with that idea.

So I got into it and did quite a bit of research about the players and the times and watched a lot of old footage of live performances. I was fortunate enough as well that here where I live in central Florida, I have a buddy Michael Franklin who’s an incredible musician. I’ve known him a long time, and he was able to help with the horn arrangements, and also lining up the horn players who were just so good. And what makes all the difference is these guys really knew what they were doing.

Generally, I would play the part that the tenor sax or the lead trumpet would do, and that seemed to work pretty good. And then other times I found a little spot for myself that I just added to it. So it was an interesting project. It takes some time to get used to the way the changes run around there, but it’s not difficult. It’s just different from what I was used to. So once I got used to that and figured out what they were doing, it was okay.

How much if any of the Swing album do you currently work into your live set?

We do “Sing Sing Sing,” which features our drummer Tommy. We tried putting in “Is You Is or Is You Ain’t My Baby,” which I think is great. We played it live with even a little more confidence than we did when we recorded it, but it doesn’t seem to fit anywhere in the set. It just kinda lands with a thud. We tried it three or four different places [in the set] and it just didn’t get a response. There’s nothing worse than that! But we’ll see.

You stay really busy with live dates. About how many live shows do you do a year these days?

Maybe 60 or 70. I don’t mind; I like playing live, but I don’t want to go on tour for weeks at a time. Generally we’ll play Thursday, Friday, Saturday, Sunday, or even maybe less than that. And so that works out fine because then we’ll have a week or two off. And in that period I can get together and rehearse with the guys and work on new material and rehearse songs for our set.

How has touring changed over the years for you?

I don’t know. I guess I’m a lot more philosophical about it, and I don’t think about it as much. But all in all, I’d rather be getting a root canal! It’s the travel. The playing is the fun part, but that only lasts like 90 minutes; the other 22 hours out of the day you’re never really settled. You’re packing your suitcase and going to another hotel where you unpack and then go to soundcheck, try to have dinner, do the show, come back, get up early pack, leave, et cetera. Then there’s airports, which is a whole different kind of aggravation.

You’re already working on the next album, right?

Yeah. We’re working on a new original Pat Travers Band album that we’re going to put out this year. I’ve been working on tunes and things for the last couple of years. I already have four really good tunes recorded, and I’ve got a few more written. I really feel good about it. I got a new guitar, so it’s inspiring me. I had a special Stratocaster made for me and I got in about a month ago. Mostly I’ve just played Gibson and PRS, so it’s a different thing for me. It’s cool.

Your recording career extends now over 40 years. How has your approach to your instrument changed in the years since you released your debut album back in ’76?

Well, you know, initially the very first album I did was just so stripped down, with virtually zero overdubs. I would play a rhythm guitar and then I would play a lead guitar, and that – plus bass and drums – would be it. It was pretty fundamental. For the second album, Makin’ Magic, I got a bigger budget and a better studio, so I experimented. But once again it was just the guitar; I didn’t use any keyboards … or, not very much; just a touch here and there. For the most part I experimented with different tape speeds and flipping the master tape over, recording things backwards at different speeds, and it was interesting. It was just out-and-out experimentation, but I learned a lot, and I had a lot of fun.

I didn’t start getting crazy about keyboards – although I always loved them – until the Crash and Burn album. Really, I’ve mostly concentrated on the guitar. And if anything, now I’ve definitely gone back to having a lot less guitars recorded. In other words, I used to play a rhythm part, and I would double track that rhythm part. Then I would add some flourishes here and there possibly double track them and have harmony lead guitars. So there were generally at least six tracks of guitar on everything I recorded.

But now I have been listening to a lot of recordings, and I think less is more on a recording. You hear those great old Who songs like “Won’t Get Fooled Again.” There’s no guitar overdub; it’s just one guitar. It sounds huge, so that’s an interesting phenomena. You would think that if you double tracked it you would get something that sounded bigger, but it doesn’t seem to work that way.