Pat Travers is Still Right in the Swing of Things 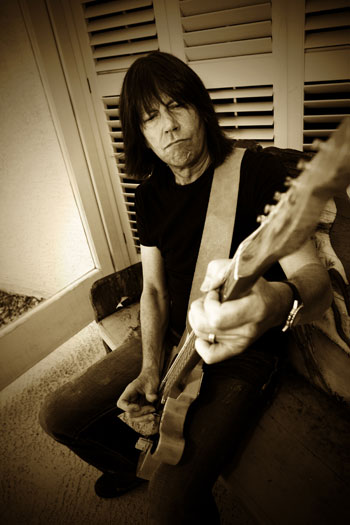 Pat Travers was part of a wave of late ’70s guitar heroes, artists who – in the wake of Peter Frampton’s runaway success – seemed poised to break out in a major way. But just as that started to happen, a combination of changing fashions, corporatization of rock radio and just plain bad luck blunted Travers’ momentum. But he’s soldiered on, continuing to build a deeper and more varied body of work that holds up today. And he remains active outside the studio as well, playing dozens of live dates all over the U.S. and his native Canada.

Travers first came on the scene with his self-titled 1976 debut album. Building a straightforward, blues-influenced sound around a trio of himself on guitar plus a bass and drums rhythm section, he delivered a sturdy set of rockers; half of the album tracks were original tunes, and the rest were well-chosen covers like Chuck Berry’s “Maybelline” and Little Walter’s “Boom Boom (Out Go the Lights).”

The latter would be a minor hit single for Travers when released in a rowdy live version on his fifth album, 1979’s Live! Go For What You Know. On the strength of that record’s success, he followed up with his most popular studio album, 1980’s Crash and Burn.

Unfortunately, today that record title seems more than a little prophetic. His next album fared poorly on the charts. When it’s suggested that the launch of MTV – with its favoring of visually- and style-oriented groups over artists who played guitars – might have contributed to his commercial misfortune, Travers agrees that it may have been a factor.

“But the kiss of death – the real bite – came before that,” Travers says. He lays the blame for the end of creatively vital rock radio stations (like the ones that played Pat Travers records) at the feet of Lee Abrams. A pioneer of using research to build radio playlists, Abrams is credited with creating the AOR (album oriented radio) format. But Abrams’ approach usurped the role of radio station program directors, replacing their music choices with a rigid list of songs, carefully created through the use of focus groups.

The result was a loss of character; a radio station in, say, San Francisco no longer sounded substantially different from one in Boston. “Everything became homogenized across the nation,” Travers says. “There was no more something breaking out in the Northeast and something else happening in the Southwest.” The days of regional hits were over, and the work that touring artists did to build regional audiences became less effective.

To be fair, Travers had other difficulties around that time. He split with his management, and was locked for years in a legal battle with his record label. But Travers prefers to look forward. “That was then,” he says. “And here we are now.” Along the way, he’s never lost his creative spark. In the 40 years since Crash and Burn, Travers has released more than 30 albums. Leveraging the power of his onstage performances, nearly half of those releases are live recordings.

Despite his focus on the present and future, Pat Travers’ latest album finds him reaching into the distant past. Swing! collects big band, jump blues and swing tunes from the 1940s and updates them with a powerful rock ‘n’ roll energy. He says he got the idea after his wife tuned to a ’40s classics channel on Sirius XM. (In a bit of irony, XM Radio was co-founded by Lee Abrams.) Travers found himself thinking, “Man, these are some hot players, and it just sounds like a lot of fun.”

Travers’ new versions of classics like Glenn Miller’s “In the Mood” increase the wattage with electric guitar. He notes that the original arrangements didn’t need a lot of tinkering. “All I had to do was try to figure out how to get my guitar in there,” he says with a chuckle.

Another chestnut, Benny Goodman’s “Sing! Sing! Sing” is now a part of the Pat Travers Band’s live sets. And that aggregation remains busy, with dates booked well into this Spring. The group is nearly done recording an album of all new music, with a hoped-for release date some time in 2020. “Hopefully,” Travers says, “I’ll have the best album I’ve ever made.”