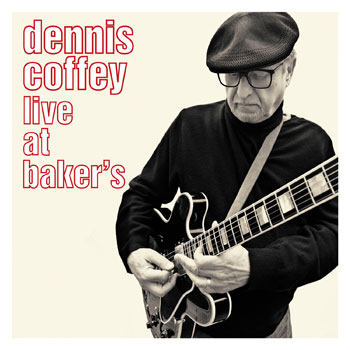 In the course of his career, Dennis Coffey has made a name for himself several times over. The Detroit guitarist was a key session player in that city’s music scene; as one of the famed Funk Brothers studio aggregation, he lent his skills to numerous funk and soul side of the 1960s and beyond. His staggering list of credits includes stinging guitar work on hits by Edwin Starr, Wilson Pickett, Parliament/Funkadelic, Freda Payne and many others. His 1970s recordings under his own name showed his skill at creating distinctive instrumental funk of the highest order; his smash hit “Scorpio” is a dance floor classic and an exemplar of its era.

But his hard rocking style – often delivered with tasteful yet memorable guitar effects – is merely one of many tricks in Coffey’s stylistic bag. As several archival releases have shown, Coffey has always been equally at home in the more exploratory context of soul-jazz. His newest release is another archival recording, albeit of a more recent variety. Live at Baker’s documents a 2006 live set at a historic Detroit music venue, Baker’s Keyboard Lounge.

Using a quartet format including Detroit Music Award winner Demetrius Nabors on keyboards, bassist Damon Warmack and Grammy-nominated drummer Gaelynn McKinney, Coffey rips into an assortment of originals and covers, all delivered with a winning combination of taste and fire. Coffey’s band brings a more jazzy texture to a reading of “Scorpio,” one that explores the tune’s potential beyond the funk idiom. Working without vocals, the trio digs into a soulful slow-jam vibe for a reading of the Temptations’ “Just My Imagination” (he played on the original).

Live at Baker’s is an understated affair, but the expressiveness and finesse with which Coffey plays these nine cuts shows that there’s subtle power in restraint. He finds a sexy and hypnotic blues vibe within the standard “Moonlight in Vermont.” Elsewhere he showcases his original take on tunes by Freddie Hubbard, David Sanborn, Jimmy Smith, Miles Davis (“All Blues”) and others.

Coffey is far from retired. Today – at age 78 – he plays every Tuesday night at Detroit’s Northern Lights Lounge.