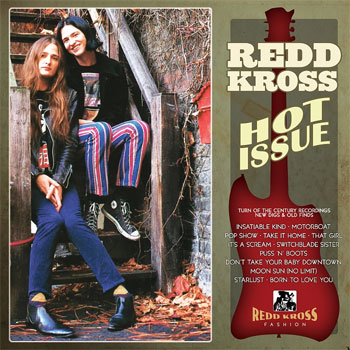 This is the second of three non-overlapping Redd Kross features. Enjoy. — bk

In a way, Redd Kross is a band captured in time. When brothers Jeff and Steve McDonald launched their punk group in their hometown of Hawthorne, California (a fertile musical ground that also gave the world the Beach Boys and Emitt Rhodes), bass-playing younger brother Steve was only 13. The band had a brush with the majors in the 1990s but has largely remained underground.

But in another important way, Redd Kross is vital, fresh and new. Active as ever today, the band recently released an archival album as well as an expanded reissue of one of its earliest records. And a new record a large-scale tour – double-billed with Melvins – is set for 2019. I recently spoke with Steve McDonald about the new records and the band’s connection with pop culture.

Redd Kross’ music has always showcased the band’s fascination with pop culture. And while it’s not strictly necessary to understand all the references in the songs, it certainly adds to one’s appreciation of the music. Do you think that there’s a kind of “inside baseball” aspect to Redd Kross’ music that might have kept it from appealing to a wider audience, one that didn’t catch the pop culture nods?

Probably; I don’t know. But my brother is a very a specific kind of person that, in some ways, enjoys kind of confusing people. That’s something that he really likes to do; he likes the mystique of it. But at the same time, the music that we love and the things that we’re referencing are all things that were also kind of mainstream culture, but of another era.

You and I are of the same generation; when we were growing up, there was kind of a mass pop culture. Even if, let’s say, you didn’t like Led Zeppelin, you knew what they sounded like. That shared pop culture experience doesn’t seem to be exist today.

That’s true. Probably the biggest difference with the internet age is that there are so many more information pipelines. So, we are having very different experiences. And so a lot of the things that we used to comment on at the beginnings of Redd Kross were sort of the tail-end of popular culture as it was for many, many years where everybody had the same three channels. When however many people watched the Beatles on Ed Sullivan – whatever that percentage of American homes – that moment, at least in rock and roll, where there’s that kind of audience and shared experience, will probably never happen again.

How did the new Hot Issue compilation come about?

Well, my brother has his own little sort of vanity label he calls Redd Kross Fashion, and with that, he’s released all sorts of cool, fun collectibles … or [he] plans to. He curated that himself and put it out himself a little bit ago. Then, there was just a little bit more of a demand for it, and Merge [Records] dug it. So, Merge has decided to reissue it this year.

I know one of the Hot Issue tracks – “Switchblade Sister” – from one of the 1990s Yellow Pills compilations. But beyond a blurb inside indicating the songs were cut between ‘80 and 2006, it doesn’t include any details. Was that omission of sort of a nerdy discography a “let the music stand on its own” thing, or was there some other reason for not including that information?

Teen Babes from Monsanto has also recently gotten the expanded reissue. When you listen to those songs played by a seventeen year old you, do you recognize that guy?

Sure, yeah. I mean, I remember the sessions. We’ve added some other cover tunes that we recorded later, but the bulk of that original record was recorded in 1984. And I had this brand new BC Rich Warlock bass, which is this crazy, pointy instrument; that look would be very common with metalheads everywhere. I recently rediscovered that bass and I took it out on the road; I hadn’t played it in like 20, 30 years. And that’s another way to get in touch with that 16, 17 year old. I hear that kid on that record, the kid that got that bass and was really excited about it, and I’m still very much that kid. For me, the easiest way to get in touch is to grab that guitar and play it.

I still have pretty much all the instruments I ever used to make our records.

Yeah; it’s a cool thing. That’s definitely one perk from being in a rock band all these years. There’s a tradeoff, as with everything in life. Being an underground rocker, it might not be the most financially stable, but at the same time, you really get to keep your youth as long as you’re willing to keep up with your youth. Especially as I get along in my life, I’m very, very appreciative for all of these things that I’ve done and get to do and continue to do.

To your knowledge, are there more archival Redd Kross tracks that might someday see official release?

I don’t know if there’s a lot of stuff that hasn’t been bootlegged at some point that exists, but I don’t know if we’ll ever have an unearthing like the Beatles’ White album.

When we did Show World, our last record before we went on hiatus, I think we kind of started it once and then, for various reasons, stopped for a moment and then regrouped and then went back into the studio. And that second session was predominantly most of the tracks that ended up on the record, but there was a first session with tons of songs that never saw the light of day. So, it would be cool if some of those come out.

I am jealous of some of my peers like the guys in the band Sloan, the great Canadian band. They’ve always been really good at archiving their stuff. One of the guys in the band has a real collector’s spirit, so they’re able to pull from any era quite easily. Whereas me and my brother – not entirely unlike our taste in junk food culture – we’ve kind of treated our archiving in a similar junky way. And now as I’m a little bit more of an adult, I look back and try to kind of figure out, “Okay. So, where is this stuff? What is it? What do we have?” And it’s a little challenging.

Redd Kross and your other work has always had kind of one foot in punk and the other in power pop. Do you see those styles as related and complementary, or is their a tension between them?

Well, I mean, the first punk band I ever heard was the Ramones, and I think that that is sort of the perfect combination of these elements.

I would say it was born out of those combinations. But in time, there’s always different factions and there’s more extreme versions to the things. Of course, I’m immediately thinking of the world of politics and the different groups: there are people who are way more in the center, [and others] way more in the fringes of all that. But those things, I always thought played nicely together.

For us, it was very natural progression to include these elements together: melodies along with a certain irreverent attitude, along with humor, and then a desire to entertain people. When we first got into the punk world, we were hanging out with Black Flag a lot as they were starting and they were developing their own sort of culture. And they had some pretty strict rules, which was a learning experience for us, all these ideas about how to be authentic and how to not be a rockstar asshole, I guess.

And I understand where they were coming from. I understand they were reacting to their own generation. They were older than me. They sort of had their own kind of battle they were fighting, and a lot of times it was sort of like, “Well, what do you mean? You think that putting on a big show and wearing makeup or something that’s fantastic that takes people to this other place – like a Kiss concert or something – that’s lame somehow?” And from their perspective, yeah, I get it. They were teenagers or into their early 20s around that time and I was pre-adolescent, just totally mesmerized by these early rock performances I got to see at arenas.

So, I think it just became sort of like a buffet style where we got to pick and choose what elements we wanted to include in our own music, own likes and dislikes. And to us, those different things – the pop and the punk and the snarl and the beach party – they all work together well, and it all made total sense to us. So, I guess that’s part of the appeal of our band.

I don’t know if I’m exemplifying anything very well. But I know that people that naturally get us, those are the things that they get, I suppose.