Frank is Sleeping: Zappa’s ‘The Yellow Shark’ at 25 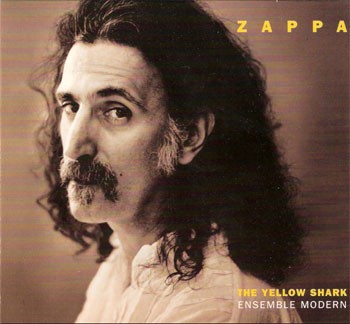 By the time The Yellow Shark appeared on record store shelves in November 1993, fans knew that the end was very near for Frank Zappa. The iconoclastic composer-musician who often quoted the words of one of his heroes, Edgard Varèse (“The present-day composer refuses to die!”) would succumb to prostate cancer a mere month after the album’s release. Famously non-religious, Zappa nonetheless seemed to come to a kind of peace with his fate. Shortly before his passing at age 52, Zappa told friend, confidante and musical associate Ike Willis, “Play my music.” The cottage industry of Zappa tribute acts that sprang up in his absence – not to mention the efforts of his (highly controversial) Zappa Family Trust – have helped keep his name in popular culture. But one could reasonably argue that his fame and acclaim would have endured regardless.

The Yellow Shark was Zappa’s 62nd album, and one of very few on which he did not appear as a musician. Zappa did compose the music, oversee the performances and produce the recording featuring Ensemble Modern, a Frankfurt, German based classical assemblage. Though quite ill by this time, Zappa managed to conduce the ensemble on a few of The Yellow Shark’s tracks.

Most of the albums that appeared under Zappa’s name in the years leading up to The Yellow Shark’s release were archival releases; the You Can’t Do That on Stage Anymore series was the centerpiece of his final spate of releases; other live collections (Broadway the Hard Way, Make a Jazz Noise Here) documented contemporary concerts. The Yellow Shark is more of a piece of the latter; in a way it can be seen as the final installment in a live trilogy exploring late-period Zappa live in different musical idioms: comedy/rock (Broadway), jazz (Jazz Noise) and classical. (If one discards the trilogy idea, there exists a fourth, The Best Band You Never Heard in Your Life, a characteristically bizarre covers collection.)

Fans who appreciated Zappa’s brand of humor might initially have been scared off when learning of The Yellow Shark’s classical nature. Answering his own question posed in the title of his 45th release (1986’s Does Humor Belong in Music?) with a more tentative “yes,” Zappa delivers his trademark humor both within the music itself and via the spoken commentary that sometimes punctuates it. But he does so only occasionally on The Yellow Shark; overall it’s among the most serious of his releases.

Zappa introduces the concert in his inimitable style; there’s barely a hint of weariness in his voice as he acknowledges that the audience has come to see “really fine musical performances by a really fine modern music ensemble.”

Ensemble Modern consisted of more than two dozen musicians under the direction of conductor/violinist Peter Rundel. And while The Yellow Shark features a wealth of previously-unheard material, so too does it include modern classical arrangement’s of Zappa works from throughout his career. The Ensemble reaches way back to the late 1960s for an abbreviated reading of “Uncle Meat” (from the album of the same name, itself the soundtrack to a film that wouldn’t appear until many decades later), and tackles a couple of other compositions from that 1969 double LP. Zappa’s progressive/fusion phase is represented by “Be-Bop Tango, and his late-period work – much of which was originally realized on the Synclavier rather than through classical instrumentation – is represented by the inclusion of “G-Spot Tornado.”

There’s a haunting, majestic feel to the newer compositions. The title of “Outrage at Valdez” refers to an oil tanker disaster off the Alaskan coast; here Zappa creates a work of breathtaking scope. Zappa often worked in odd meter (by rock standards, that means most anything outside 4/4), and the compositions here continue in that vein. But a beat – customary in rock and other pop music forms – is often not a major component of these performances. In fact only two of the 25 or so musicians in Ensemble Modern play percussion. 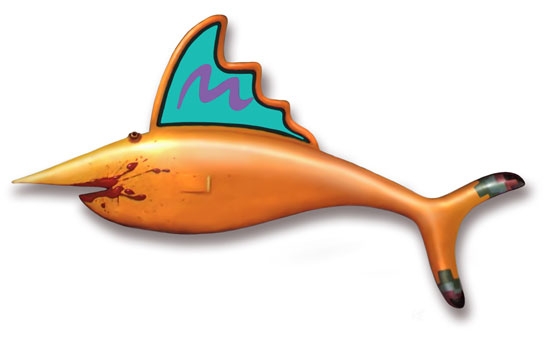 Keening, near atonal violin screeches are at the center of the brief “III Revised.” The composition wouldn’t have been out of place within the extended Lumpy Gravy piece, the soundtrack of 200 Motels or the late 1970s sessions eventually recompiled as Lather. The odd bits of dialogue that were a feature of much of Zappa’s modern-classical work appear only occasionally here, most notably in the spoken-recital pieces “Food Gathering in Post-industrial America, 1992” and “Welcome to the United States,” a pair of compositions that resonate even more so in the sadly post-Zappa, Trump-centered world.

Acclaimed at the time of its release, today The Yellow Shark remains a compelling work; it’s perhaps the most successful of Zappa’s classical endeavors. That doesn’t mean, however, that it will appeal at all to fans whose idea of Zappa music focuses on “Don’t Eat the Yellow Snow,” Valley Girl” and Joe’s Garage. Neither is it likely to impress listeners whose concept of classical music beings and ends with Bach, Beethoven and Brahms. It’s a knotty, difficult work, one that demands active listening. But for those who appreciate Frank Zappa’s body of work – and especially those who subscribe to the Project/Object philosophy holding that all of Zappa’s output is part of a single larger work – it’s simply essential.