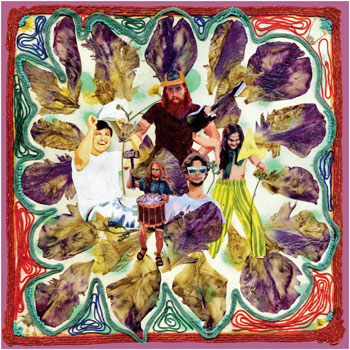 Some artists play music that – if one wishes to label it – requires several words to describe. Formed by five students at Boston’s Berklee College of Music, STIG (the band spells its name in all caps) self-identifies as an “all-instrumental progressive jazz funk” band. In a hurry, some might be tempted to label the group a jam band, but the tunes – lengthy as they often are – do adhere to a tight construction aesthetic that belies that label. Recently relocated to Asheville, the group has recently released its first studio album, Agreed Upon.

Coming on the heels of two live collections (2016’s debut Flex and Live at the Orpheum: 10/8/17), Agreed Upon aims to capture the spontaneity of a live STIG performance in the controlled environment of the recording studio. In fact four of the new studio album’s seven compositions appeared on the 2017 live release.

Though its title indulges in a bit of shooting-fish-in-a-barrel humor, “John Travolta Comes Out” is a catchy New York City-flavored funk-jazz stomper. The rhythm section – bassist Artie Sadtler and Jack McChesney on drums – lays down a throbbing, insistent groove. That foundation serves as a sonic canvas upon which saxophonist Ryan Stigmon splashes an extended solo that takes up the first five minutes of the cut. Once Stigmon has his say, keyboardist Thomson Knoles lays down a tasty and soulful Rhodes-flavored keyboard solo. As the tune winds toward its end, guitarist Riley Hoover – who up to this point really hasn’t had much opportunity to shine – vamps a bit.

“Moomaw” – one of the tracks heard on the previous disc – executes a knotty bit of interplay between the instruments. Stigmon lays down multiple horn parts, and the focus bounces endlessly – multiple times per measure, even – between sax, guitar and keys. Hoover gets his turn in the spotlight, and makes the best of it with some nicely effected single-note runs up and down the guitar fretboard. Near the track’s end, the kinetic interplay between instruments returns to center stage.

“No Dads” is one of three STIG tunes not found on previous releases. The performance fades in, suggesting that the recorded take – nearly 11 minutes long – is part of a longer-still studio run-through. The melody alternates between an insistent, single-note section and a twisting burst of notes. Knoles’ keyboard is the centerpiece of the cut’s first several minutes; his watery 1970s-styled electric piano is subtly accented with feedback guitar that evokes memories of Cannonball Adderley’s futuristic soul jazz outings with keyboard master George Duke and guitarist Mike Deasy. The tune’s midsection leans in a kind of Steely Dan jazz-pop direction, with subtle hints of George Benson. After a wild, horn-led interlude, Sadtler takes the (inevitable in the jazz idiom) bass solo. Or perhaps it’s a synth-bass, or both instruments together; it’s difficult to tell.

The uncharacteristically brief “Bring Your Snorkel” starts off with some seaside sound clips, and the tune unfolds as one with stuttering wood-block percussion, watery guitar picking and – in case anyone missed the theme – electric piano that sounds as if it’s submerged in a swimming pool. A full thirty seconds of waves-on-the-shore sound effects round out the two-and-a-half minute track.

“Jane’s Brownies” ran nearly 14 minutes on Live at the Orpheum; for Agreed Upon, the funky number is trimmed to nearly half that length. With a complex melodic line redolent of the Meters, it provides some of the strongest musical moments on STIG’s new record. Knoles’ organ engages in dialogue with the rest of the band, and a catchy, memorable musical phrase gives the band a safe base from which to explore. An infinitely sustained note (or so it would seem) gives space for Stigmon to wail on his sax; he continues to do so even after the rest of the band returns to a more intricate vamp. The last few moments are given over to some Shaft soundtrack-style funk jamming, with bassist Sadtler and wah-wah-ing guitarist Hoover out front.

“Kangaroo Pitstop” opens with heavily distorted Clavinet; the rest of the band executes a slow-churning, heavy riff that suggests Black Sabbath with a funk mindset. That recedes to make space for a vaguely reggae-flavored section; the two disparate styles alternate throughout most of the track’s nine minutes, with some laid-back Stigmon soloing as a highlight.

The final seven minutes of Agreed Upon are given over to “Poultney Parade,” a simmering yet cheery musical excursion that features Knoles’ electric piano supported by tasty chording from Hoover. Overdubbed brass and lots of handclaps imbue the track with some urbane gospel seasoning.