Not lost in translation
Both Funakoshi and Taguchi understand a bit of English, as evidenced when they would begin laughing or responding even before the interview questions were translated. But with the exception of the occasional guest vocal — like Curved Air’s Sonja Kristina’s lead on the Ship track “Tears of the Figurehead” — Funakoshi’s lyrics are sung in Japanese.

To a large extent, with Yuka & Chronoship uses Funakoshi’s vocals an an instrument, more as a means of wordless expression. “That is exactly what I try to do,” she says. “I’m trying to convey not just linguistic process, but the sound of emotions.” 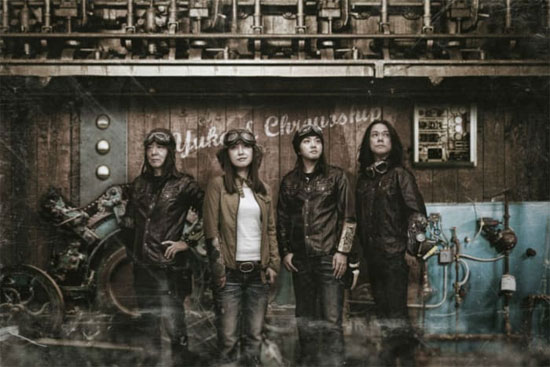 And while some might detect a slightly Eastern vibe to the group’s music, that quality is not intentional on the composer’s part. “Listeners outside Japan will say that there are some parts of my compositions that sound quite oriental, very Japanese,” Funakoshi says. “Perhaps, the finger-play, melody and chords have some Japanese characteristics that I wasn’t quite aware of when I was composing the tunes.”

Funakoshi says that when composing music, she draws inspiration from nature. Born in Tōno, a small city in the northern Japan prefecture of Iwate, Funakoshi describes her hometown as “a very famous place in Japan because it is in the countryside with lots of nature.” The history of Tōno is wrapped in folkloric tales of spiritual entities. “The beauty — and at the same time the brutality — of the nature there gives me the type of sound and inspiration for my musical creations,” she says.

The voyage continues
After Water Reincarnation, Yuka & Chronoship moved forward less as a project and more as a cohesive band. Funakoshi describes the group’s second album, 2013’s Dino Rocket Oxygen, as “the one where Shun tried to involve all the other players into the album. They worked very hard … probably too hard,” she says. The well-received album earned more positive notices, but like the band’s debut, distribution beyond Japan was limited. For Dino Rocket Oxygen, Taguchi realized one of his personal dreams when he prevailed upon famed artist Roger Dean (designer of countless Yes album covers) to craft a custom logo for the group.

Yuka & Chronoship worked with UK-based Cherry Red Records to put together a worldwide distribution deal for the group’s third full-length, 2015’s The 3rd Planetary Chronicles. Though there would still be no international touring, Cherry Red helped bring Funakoshi’s group and music to a wider audience. Reviews for Chronicles were even more positive (and numerous) than before. And Funakoshi says the experience of making that album was more enjoyable. “We tried to make it a little looser than before, to create a nice ensemble of all four players.”

Ship was released worldwide on May 11, 2018. Funakoshi says that while the studio approach may change from album to album, her method of composing remains consistent. “I am always trying to create songs quite naturally,” she says, “waiting for the tune to come out naturally.”

Taguchi explains the ways in which he provides a kind of composer’s prompt for the keyboardist. “When I am planning to make an album, I will give a couple of themes to Yuka. And in the case of the new album, I gave her a picture of a figurehead, and asked her to make a song concerning the picture.” Funakoshi did some investigating on her own, and stumbled on the Greek myth of Argo, the ship with which Jason and the Argonauts pursued the Golden Fleece.

With that story in mind, Funakoshi composed the seven-part “Argo Suite.” Wordless save for Sonja Kristina’s vocal turn on the elegiac opening movement “Tears of the Figurehead,” the suite moves through different styles and textures in the grand tradition of classic progressive rock. “Yuka will make an almost endless number of melodies, depending on the kind of theme I give her,” says Taguchi. “That’s how the album was created, and how the different songs on the album were born out of our cooperation.”

With the growth of the band’s fan base worldwide, highly-regarded albums and the ongoing Cherry Red distribution arrangement, there’s every reason to expect more music from Yuka & Chronoship. “I am always surprised to find that there’s no fixed pattern to Yuka’s music,” says Taguchi. “It always excites me to give her a new concept. Because Yuka Funakoshi has an enormous store of musical ideas and creative sources.”