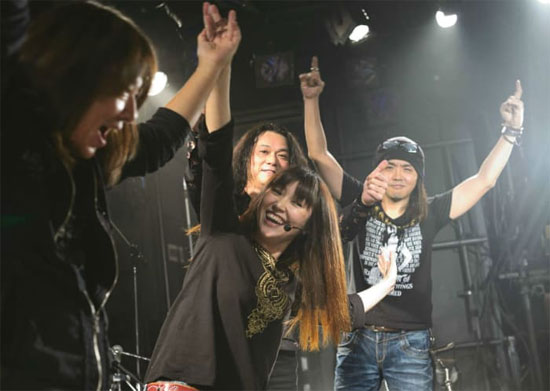 The keyboardist’s gear
While Funakoshi’s compositions lent themselves to a progressive context, it was a different story when it came to her her playing style. Prior to forming Yuka & Chronoship, the keyboardist had played acoustic piano; she had never laid hands on an electronic instrument, much less a synthesizer.

“The transition was, at first, very, very difficult for me,” she says. “The touch of a synthesizer is different.” And the virtually limitless sonic palette of synthesizers was unexplored territory for Funakoshi, too. “Switching back and forth between the two was hard,”she admits. “It took a long time to get used to all of that.”

Today, recording and performing with Yuka & Chronoship, Funakoshi makes use of a relatively simple and straightforward keyboard setup. Her primary live and studio instrument is an 88-key Yamaha weighted keyboard, the S90XS. She also plays a Roland A-500 PRO, a 49-key MIDI controller. “And my sub-keyboard is a Roland A 49,” she says. “A very, very inexpensive one that’s also very light so that it can be easily carried.”

Funakoshi’s aural palette makes use of piano, harpsichord and overdriven Hammond organ-type sounds. Asked if she makes use of any analog keyboard technology — perhaps a Moog modular like Keith Emerson used — the keyboardist is direct. “No analog at all,” she says.

A group mindset
While Funakoshi’s keyboards lie at the sonic center of Yuka & Chronoship’s arrangements, there remains plenty of space for the other musicians to display their instrumental prowess.

“I and all the other players are trying very hard to construct one whole tune,” Funakoshi says, “hopefully integrated with different instruments.” She says they work to avoid a musical situation in which “the keyboard is in the center and all the others are trying to push it out. The music has a totality in that ensemble, and that’s very important for me.”

Though he names Pink Floyd as far-and-away his favorite group, Taguchi’s bass style owes more to the Chris Squire style of playing. Exclusively using a stereo Rickenbacker 4001 bass, Taguchi deftly navigates his musical role within Yuka & Chronoship. He explains his approach. “Yuka’s composition is quite unique,” he says. “I am trying very hard to support her, and the way to do that is to act as a counterpoint to piano and guitar.”

It’s reasonable to wonder if the the left-hand, lower-register parts of classically-trained Funakoshi’s playing occasionally clash with Taguchi’s bass lines. Taguchi says the problem rarely arises, even during composition. “When the bass line and the left side of the keyboard threaten to overlap, Yuka and I discuss together how to solve the issue,” he says. “I try to be very sensitive to that kind of problem. And Yuka is very good at it, too.”

The Chronoship lineup
Promotional materials for Yuka & Chronoship describe the group as Funakoshi plus “three leading studio musicians.” Before beginning to work with Funakoshi in the late 1990s, Shun Taguchi produced popular all-female rock-pop group Princess Princess; that band released ten studio albums between 1986 and 1995. In addition to production duties for other artists, Taguchi is also a popular songwriter in his own right; his song “Uisukii ga, Osuki Desho” (“You like whiskey, do you not?”) was recorded twice, first by Saykuri Ishikawa and then again in 2011 by Azusa Miura on the Japan-only album The Idolm@ster Artist 2. “Shun is a very famous lyric writer here in Japan,” Funakoshi says.

Drummer Tanaka and guitarist Miyazawa both work on a variety of projects outside Yuka & Chronoship as well. Ikko Tanaka played both live onstage and in the studio with Takahiro Matsumoto’s genre-hopping, huge-in-Japan duo B’z. And Takashi Miyazawa has done studio projects with influential Tokyo-based arranger-producer-composer Masataka Matsutoya; not unlike Funakoshi, Matsutoya’s work often combines classical music characteristics with pop styles.

A woman in prog
It’s fairly rare to see a female instrumentalist fronting a progressive group, especially in Japan. But Funakoshi says that being a woman hasn’t made things more challenging for her as a musician. “I think it’s quite lucky for me to be a woman, especially engaged in the field of progressive rock,” she says. She points to the rarity and novelty of her status as a Japanese prog musician as the source of “a lot of opportunities in Japan.”

Funakoshi concedes that in her J-pop days she found that female performers were viewed differently than their male counterparts. “But now that I’ve played in progressive rock, I don’t feel any different when I am viewed and reviewed,” she says.

Taguchi and Funakoshi both say that the progressive rock community in Japan is comparatively small. “Progressive rock in Japan is not a major genre of music,” Funakoshi says. “There are a certain number of enthusiastic fans, but progressive music is not that popular compared to other contemporary genres of music. Dance music and J-pop occupy the ranking.” Still, whenever Yuka & Chronoship schedules a Tokyo date, the venue sells out.

As a composer, Funakoshi says she gets a sense of satisfaction playing live. “My creations are displayed there,” she says. “ I feel that I am given a proper place on stage — just like the frame of a painting — to accommodate my creations.”

Yuka & Chronoship haven’t yet made it to the United States. “But we have played twice in France and once in Italy,” Funakoshi says, “in summer music festivals. We really want to play outside of Japan —in the United States or Europe — at least once a year.”