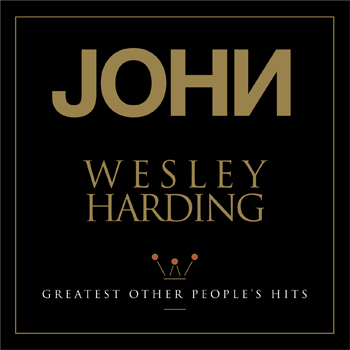 Nearly everything one first learns about John Wesley Harding suggests the man is a smart-aleck. A folky troubadour transplanted long ago from Hastings, England to the U.S., the man born Wesley Stace adopted a stage name taken from one of Bob Dylan’s most celebrated releases. (Some years ago he also released an album that waggishly poked fun at that nom de musique: the first release in his Dynablob series even featured cover art modeled after Dylan’s 1967 LP.

As fine a songwriter as he is – 1990’s Here Comes the Groom and 1992’s Why We Fight are overlooked gems – Harding/Stace is also a keen and incisive observer of pop culture. He’s authored several books, and his deep catalog featured humorous songs about ABBA’s quest for world domination as well as one (“When the Beatles Hit America”) that sagely predicted not only the “Threetles” studio reunion of the 1990s but Jeff Lynne’s role in that project as well. A renowned raconteur, he served as co-master of ceremonies at Yep Roc Records’ 15th anniversary gala/festival, trading witticisms with Eugene Mirman.

Against that backdrop, perhaps it’s not terribly surprising that Stace/Harding would eventually choose to record an album of covers. And that’s precisely what Greatest Other People’s Hits is: 17 songs, all made famous and/or written by some of the man’s favorite songwriters/performers.

And it’s quite a varied lot. The set opens with perhaps Harding’s most well-known cover, a reading of Roky Erickson’s “If You Have Ghosts,” originally featured on the 1990 all-star Roky tribute album Where the Pyramid Meets the Eye. Backed by his then-band the Good Liars, Stace tears into the tune, paying tribute while lending the song some of his own character as well.

That recording and a reading of Elizabeth Barraclough’s “Covered Up in Aces” (the latter featuring Barraclough singing and playing with Stace) are the oldest tracks on what is essentially a compilation. A few of the tunes have not been released before now; others appeared only on hard-to-find singles, EPs or various-artists collections.

Though Harding is his own man, he does love a duet. In addition to the side with Barraclough, Other People’s Greatest Hits finds him singing songs by (and with) Bruce Springsteen (“Wreck on the Highway” and “Jackson Cage”) and Lou Reed (“Satellite of Love”). He also takes the opportunity to pay tribute to some of his heroes including George Harrison (a cover of “Wah Wah” that follows Harrison’s wall-of-sound approach to arrangement, collaborating with the Universal Thump), Madonna (“Like a Prayer”) and even Serge Gainsbourg (“Je Suis Venu te Dire Que M’en Vais,” sung in French). Elsewhere he gives a nod to his folk antecedents Phil Ochs (a decidedly rocking-out “Another Age”) and Pete Seeger (“Words Word Words,” a collaboration with the Minus Five). A reading of Jimmy Silva’s “Need I Know” is yet another highlight of the set.

Despite his reputation as a wryly clever performer, on Greatest Other People’s Hits, John Wesley Harding plays it straight, delivering heartfelt, often rocking readings of songs he loves.