A Noisy Celebration in Asheville

Asheville, N.C.-based inventor Tony Rolando founded Make Noise in 2008 to develop and sell analog synthesizer modules. The company has thrived and grown and moved into development of complete modular systems. Make Noise celebrated its 10th anniversary with a wide array of events, including panel discussions, dance parties, hands-on exhibits and a concert showcase at the Diana Wortham Theatre in Asheville on Friday, June 15.

Rolando had worked at Moog Music Inc., but at the time, the market for modular synthesizers was still too small to be viable (pioneering Moog re-entered the modular field in 2014). So he started his own fledgling company in Marshall, first designing a single module called modDemod. A ring modulator, the modDemod processes electronic sounds by mixing and multiplying audio signals. “He made an extraordinarily small edition of those,” says Pete Speer, who handles media relations at Make Noise. “They all sold, and Tony thought, ‘OK, I’ll make some more because those people seemed to like them.’” 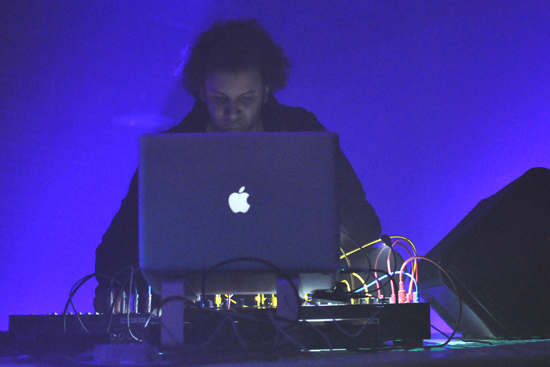 Make Noise grew from there. The first module was eventually put into regular production, and its success led the way toward development and marketing of other modules. Today, the company has about a dozen employees at its West Asheville facility, and the Make Noise product line features more than 20 modules and several synthesizers.

Innovative, groundbreaking experimental musical artists like Tyondai Braxton are among those deeply immersed in the world of modular synthesis; Braxton was one of the featured performers at Make Noise’s 10th-anniversary showcase concert. The co-founder of art-rock group Battles, Braxton’s compositions include HIVE1 from 2015, a work that premiered at the Guggenheim Museum in New York.

Speer says that the celebration’s musically diverse lineup focused on “artists who we’re excited about. And the work to which we at Make Noise tend to be drawn is all over the map in terms of style; it’s more about intent.” Other performers at the Diana Wortham Theatre show included Robert Aiki Aubrey Lowe (known for his spontaneous arrangements of modular synthesis and voice); Los Angeles-based Bana Haffar, creator of shimmering analog compositions; Meg Mulhearn (an Asheville-based songwriter who also composes for film) and thump/techno innovator Moe Espinosa in his guise as Hypox1a.

The Make Noise celebration weekend extended well beyond that showcase. On Saturday, Ambrose West hosted four panel discussions, all free and open to the public. Artists from the Friday concert led a discussion on performing and composing with modular synthesizers, and other panels explored related topics, including building community through modular synthesis.

Black Mountain College Museum + Arts Center hosted a sonic sculpture by Richard Devin; while at the Asheville Movement Center, an endless loop of films by Sean Patrick Curtis was displayed. In conjunction with the All Go West Festival, Make Noise partnered to host a dance party and concerts at Black Cloud and The Mothlight. Make Noise’s anniversary celebration concludes with a series of modular synthesis performances, a free event billed as Modular on the Spot, and held at French Broad River Park.

In fall 2012, Make Noise unveiled its first complete modular unit. Dubbed the Shared System, it features “the majority of what we had at the time in terms of oscillators, modulators and controllers,” Speer says.

The Shared System was unveiled in a unique manner: Initially, there was only one unit, and it was put to use by several artists in succession, “each of whom would compose on it,” Speer explains. “It was mailed from one artist to the next,” crisscrossing the country.

In 2012 and 2013, a series of 7-inch vinyl discs was released on Make Noise Records. Each showcased the results of one artist’s work with the new Shared System. To date, the label has released a handful of titles, all featuring artists who employ Make Noise modular gear. The latest releases are titles by two of the artists featured at the June 15 concert: Haffar and Hypox1a. 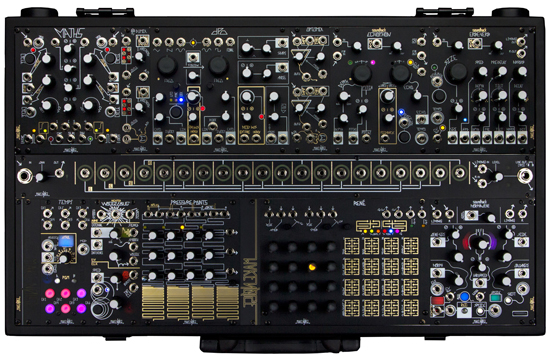 While Make Noise has its foundation in traditional analog synthesis, Speer says that the company “embrace[s] a lot of the digital possibilities” as well. Make Noise’s product offerings include several digital modules. Some of these, Speer says, make multiple digital techniques — additive synthesis, phase modulation and noise-based synthesis — available simultaneously. While that claim might not mean much to the casual observer, in the world of synthesis it’s something of a breakthrough.

Through close cooperation and interaction with artists, Make Noise has been able to remain responsive to the wants and needs of synthesists. And Speer has a good handle on what lies behind the enduring appeal of modular synthesis, a concept that was pioneered in the early 1960s by Don Buchla in Berkeley, Calif., and Robert A. Moog, then working in upstate New York.

“A lot of people are drawn to the customization,” Speer says. Users enjoy the freedom to effectively create the instrument as they see fit. “When you pull the cables out, [a modular synthesizer] doesn’t make a sound,” he points out, “so it appeals to people who like to have a certain amount of control and agency to experiment with new sounds.”