Ableton Live is computer software that allows musicians real-time interactivity with sequences of notes, sounds and textures. While the software is often used as a creative studio tool, in the hands of Asheville musical collective Evil Note Lab, Ableton Live realizes its potential as a performance instrument. Evil Note Lab puts its groundbreaking musical experiment on display every Wednesday night at One Stop.

The Evil Note Lab project began in February and features three local multi-instrumentalists: Phill Bronson (Jonathan Scales Fourchestra), Ben Hovey (HoveyKraft) and Derrick Johnson (Yo Mama’s Big Fat Booty Band). Each Wednesday at 10 p.m., Evil Note Lab — the name is an anagram of the software upon which the project is based — blends traditional instrumentation and high technology to create an unpredictable, improvisational evening of music. 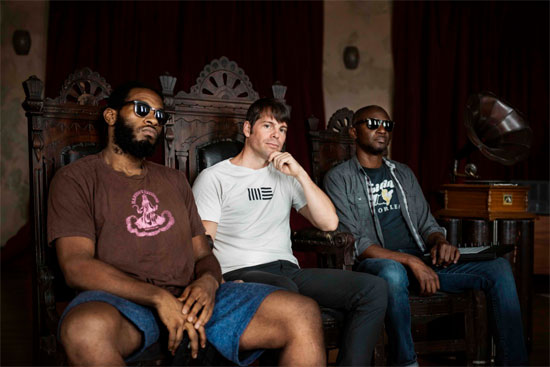 Onstage, all three musicians use an interface called Push to control and interact with the software. Push looks more like a keypad than a traditional synthesizer keyboard. “We’re using Ableton Live as an instrument,” says Bronson. “Ableton itself is a communication tool; the technology link makes us one with live instruments.”

Hovey and Bronson use Mac computers to run their software; Johnson is on a PC. Typically, getting those laptops to communicate would pose some challenges. But using Ableton Live, it’s seamless. “We’re linked up by my cellphone,” Hovey explains. “Ableton Link works over a Wi-Fi network; that’s how we’re able to stay in sync.”

Hovey notes that it’s impractical for Bronson to bring his drums to Evil Note Lab. But that’s not a problem: “He plays the drums on Push because it has velocity-sensitive trigger pads. And each pad can have an individual drum sound.” What’s more — and what sets Ableton Live apart from other platforms like ProTools or GarageBand — is that the user can create a sample, edit it and add it to what he’s playing, all in real time.

Those other programs are linear, explains Hovey, who is North Carolina’s only Ableton-certified trainer. They are used to create sequences of sounds that happen over a timeline. “But the great thing about Ableton Live is that we can have a bunch of different ideas, and we can trigger different sections whenever we want to,” Hovey says. The various buttons on the Push panel can be assigned to trigger loops of what was played seconds ago, a pre-made sequence, a specific sound or variations on any of those. “We can play things back in any sequence we want, on the spot,” Hovey says.

That allows for an unprecedented level of spontaneity, a quality long considered antithetical to the very idea of sequencers. And that’s why no two Evil Note Lab performances are alike. “Say we have a guest vocalist,” Hovey says. “If we want to extend a song, play 64 bars or 128 bars, we can have things loop indefinitely until we trigger the next sequence.”

And, while latency — the lag time between triggering a sound and that sound actually coming out — was long a crippling issue with software-based music technology, Ableton Live has solved that challenge. “It’s just as fast as we are,” says Bronson.

Both Hovey and Johnson often add traditional instruments to the live mix, playing analog keyboards, trumpet, trombone and guitar. “And then I might add a track of my own drums that I recorded yesterday, see how it fits into what I’m doing,” Bronson says. “It’s instantaneous; I’m creating it on the fly.”

“The whole show is unpredictable,” Hovey says. “We start with a completely clean slate. The idea is to come in and improvise.” But while there’s a large element of chance, the results are still groove-oriented and musical. “Form still happens,” says Johnson.

And the technology is so intuitive that first-time users can create, too. “Even people who aren’t musicians are curious about it,” Johnson says. “They’ll come up, I’ll show them a Push, and they can play it right then.”

Evil Note Lab also reprocesses the work of others. “Phill started ‘Flip It Friday,’” Johnson says. “We remix an artist’s song, like the Beverly Hills Cop theme or Bruno Mars’ ‘That’s What I Like.’”

Doing so highlights the Lab’s skills at production: “It’s like a business card that says, ‘Hey, this is also what we do,’” says Johnson. That approach has already earned ENL a client: They’re producing an album for hip-hop artist Foul Mouth Jerk.

“We’re constantly making music,” says Bronson. “And actually having a space and a team to do it with is really good.”

Even when not onstage, the group is regularly adding new songs to Soundcloud and YouTube. Hovey and Johnson agree with Bronson when he points out the advantage of making music on the fly with Ableton Live: “You can release stuff and then tell people, ‘Hey, come out to our show. Here’s something I did this morning.’”