It’s one of those inspired ideas that leads listeners to wonder why someone hadn’t thought of it before: take modern-day hit songs, and recast them in the styles of yesteryear. That’s the winning approach of the fiendishly creative – and prolific – Postmodern Jukebox. The brainchild of New York City pianist and arranger Scott Bradlee, PMJ has become an enduring YouTube sensation with its weekly “throwback Thursday” music videos.

Bradlee admits that he didn’t see PMJ’s success coming. “It’s always very hard to predict what’s going to take off,” he says. “I don’t think I had any inkling of the possibilities, of how far this could go.” He’s lost track of exactly how many music videos – all shot on the cheap in his NYC apartment – Postmodern Jukebox has made (the actual number is somewhere upward of 200). 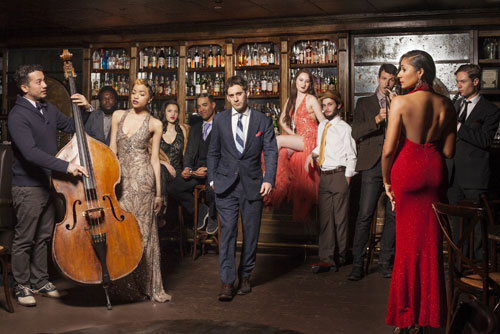 Bradlee admits that project began out of a combination of desperation and necessity. “I was trying to make a living as a jazz pianist in New York City,” he laughs, “And I wanted to build a kind of online business card.” He noticed that many musicians had made successful use of YouTube as a medium to promote their work. So he made and shared a homespun video of his own. “More people saw me play that one piece of music than had watched me play my entire life!”

Postmodern Jukebox grew out of an earlier project of Bradlee’s. Observing the backlash when rockers Nickelback – named by Rolling Stone as the second-worst band of the ’90s – was chosen to play a football halftime show in Detroit, he decided to come up with a musical program he called A Motown Tribute to Nickelback. “Somebody had made an online petition with 60,000 names or something like that, petitioning against Nickelback playing there,” Bradlee recalls. He saw an opportunity. “I thought, ‘What if I try to make both sides happy?’”

Bradlee’s retrofitting of Nickelback tunes like “Photograph” into classic 1960s-styled arrangements was well-received, and the template for Postmodern Jukebox was established. Starting in 2012, Bradlee, his band, and a rotating cast of top-flight vocalists recorded and posted a new tune every week. Eighteen of PMJ’s best tunes were compiled as The Essentials; that album was released on physical CD in September.

The live, touring version of Postmodern Jukebox serves up the group’s variety in thrilling style. A universally known tune like Celine Dion‘s Titanic smash “My Heart Will Go On” finds new life as a doo-wop extravaganza in a style that recalls Jackie Wilson‘s “Lonely Teardrops.”

There’s a never-ending supply of songs just begging for the PMJ treatment. But Bradlee is selective. While he admits that he loves a good challenge – that’s part of the project’s appeal – not every song lends itself to his radical reworking. “Surprisingly,” Bradlee says, “it’s much easier to adapt an electronic-sounding song than something that already has a throwback feel.”