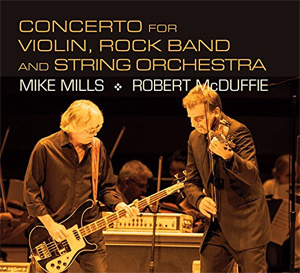 Hybridizing rock ‘n’ roll and classical is nothing new: arguably, the Beatles did it in 1965 with “Yesterday.” And many others have attempted since, including E.L.O. Yet there’s something fresh and new about this, the latest project from R.E.M. Bassist Mike Mills. Working with lifelong friend, Juilliard-trained violinist Robert McDuffie (and arranger David Mallamud), Mills has created a work that draws form the very best of both genres. The nuance and instrumental virtuosity of classical/orchestral music is combined with Mills’ knowing sense of how to write a memorable tune. The rock musicians never fight for supremacy, and McDuffie’s violin ably assumes the role normally given (in rock) to a lead vocalist. Hummable melodies abound through the six movements, and – most important of all – it rocks when it wants to. Selections from composers Philip Glass and John Adams round out the set.