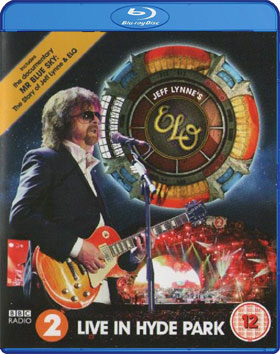 Electric Light Orchestra has long held a special, sentimental place in my heart. Way back in October 1978, I attended my first rock concert, ELO at The Omni sports arena in Atlanta. My eight-dollar ticket got me a seat in the high rafters, where this fourteen-year-old quickly learned about the phenomenon known as a “contact high.”

The concert featured ELO’s spaceship stage, a translucent clamshell affair that opened to reveal the band. To most observers it looked less like a UFO and more like a giant white hamburger bun, but it was like nothing most of us had seen before, what with lasers shooting out of it, and with fog machines cranking out clouds.

I learned much later that Jeff Lynne and company had made fairly extensive use of prerecorded tapes to flesh out their onstage sound. While that disappointed me at the time, looking back I acknowledge that live sound reinforcement was still somewhat primitive in the 70s, and that getting across the subtleties of a violin and two cellos in a room designed for basketball and hockey was a daunting proposition, especially with roaring electric instruments playing alongside.

I followed ELO’s music for awhile after that, in both directions. I went back and discovered the pleasures of On the Third Day and even the semi-legit The Night the Light Went On in Long Beach, and I even picked up my first compilation of The Move‘s music, Split Ends. And the new music that the group made was pretty cool, too, though with somewhat diminishing returns. Lynne eventually jettisoned the classical players, scaling the group back to a foursome, and relied more on a highly compressed drum sound for Bev Bevan that – to my ears anyway – grew stale and tiresome.

It didn’t help my ELO fan staus when I began discovering harder-edged groups of the early 80s. Soon I was mostly into other things. But my love for classic-era ELO has remained. I was excited in 2001 when Lynne released a new ELO album, the first in years. Zoom featured none of his old band mates save a brief appearance by keyboardist Richard Tandy, but it did include his pals George Harrison and Ringo Starr, both of whom, of course, he’d worked with in various projects. An ELO tour was announced, but in the wake of the 9/11 attacks and/or tepid ticket presales, the tour was scuttled before it began. Lynne went largely quiet after that.

Meanwhile, some of Lynne’s former band mates had taken to the road, various calling themselves ELO Part Two or The Orchestra. That didn’t sit well with Lynne (from 1972 onward, he wrote, produced and arranged all of ELO’s music), and that – combined with a renewed appreciation for the group’s back catalog – led him to schedule a handful of live dates. Those culminated with a September 2014 show in London’s Hyde Park, in front of an audience estimated at 50,000. As one would expect, the concert was filmed for the BBC, and a new DVD/Blu-ray is a document of that show. Pointedly billed as Jeff Lynne’s ELO, Live in Hyde Park is a return to the classic sound of the group; in fact, it’s a marked improvement.

The onstage band recalls in some ways David Gilmour‘s late-period Pink Floyd: plenty of musicians there to help create the sound that listeners hear on their CDs or LPs. And like Paul “Wix” Wickens in Paul McCartney‘s current band, it features a “musical director” (Mike Stevens) who, it would seem, looks after the musical activities of everyone onstage (except Lynne). Most of the musicians sing backup and harmonies, and a pair of vocalists ably fill in the remaining spaces.

The BBC Concert Orchestra is on hand to play the “classical bits,” as Lynne calls them, and they do so expertly. It seems quite likely that they’re working from Richard Tandy and Louis Clark‘s original album scores; the sound they create bears a much closer resemblance to what you’d hear on Out of the Blue or A New World Record than anything a synthesizer could manage, even in the 21st century.

And that’s the biggest change here. While the original 1970s ELO had three classical players, and the later era group had none, the reanimated Electric Light Orchestra delivers live what those classic-era albums promised. As such, Lynne can be said to be fulfilling the group’s original premise, to pick up where The Beatles left off circa Sgt. Pepper’s Lonely Hearts Club Band and Magical Mystery Tour.

The sound quality is excellent, of course, and somewhat amusingly, the Blu-ray is mixed in stereo as opposed to 5.1 surround, because (as Lynne is quoted in the accompanying booklet), “It’s important to me that viewers experience the Hyde Park show exactly as it was performed in the night…in stereo.” (By that thinking, one supposes that had Phil Spector gotten his way, The 3LP Concert for Bangla Desh box set would have been issued in monaural!)

The set list is superb, drawing from most eras of the group’s history (though nothing from 1986’s Balance of Power or from Zoom). Longtime fans can delight to the early track “10538 Overture” and the deep album cut “Steppin’ Out.” Of the latter, Lynne explains onstage that he was never happy with the original recording, and that this live rendition will be “better.” That said, it doesn’t differ greatly to the original. And hearing just how perfectly Lynne’s ELO does the Traveling Wilburys‘ “Handle With Care” makes one think that — just maybe — Lynne’s role in composing the song is greater than he admits.

Fans can quibble about the songs they didn’t get to hear – they/we always do – but the only serious omission is the band’s 1973 cover (or, rather, reinvention) of Chuck Berry‘s classic, “Roll Over Beethoven.” I wouldn’t be surprised to learn that the song had indeed been performed at this concert, only to be cut from the disc to save a few bucks on licensing/royalties.

Onstage, Richard Tandy doesn’t seem to have a lot to do; he takes an occasional brief solo, and does some brief, signature vocal parts via Vocoder, but other than that, he’s mostly seated quietly at a grand piano while two other keyboardists do the heavy lifting. Violinist Chereene Allen appears several times to turn out some note-perfect solos; in her somewhat garish skintight hot-pantsuit, she cuts a more alluring figure than the wooly Mik Kaminski ever could. The net effect of all the onstage activity is to sound almost Exactly Like The Record. The only real concession to spontaneity is Lynne himself, who often runs a half-phrase or so behind the music with his vocal lines. It’s not distracting, though; in fact it’s a bit endearing to see that he seems to have forgotten a few of his own lyrics.

Bonus features include closed captioning(!), a brief interview with Lynne from around the time of the concert, and the full-length documentary Mr. Blue Sky: The Story of Jeff Lynne & ELO. That film provides some insight into Lynne’s production aesthetic, and it highlights just what an impressive songwriter (and vocalist) he really is. Though ELO has always worn its Beatles influence proudly, Lynne’s music has never been about copying anyone (except, detractors might suggest, himself). Unfortunately, the film’s potted history makes only the briefest of mentions about Roy Wood, Lynne’s ELO co-founder; blink and you’ll miss it completely. The usual suspects (Macca, Ringo, Eric Idle, Tom Petty, Dhani Harrison) weigh in to remind us what fans they are of Lynne and his work. Mr. Blue Sky makes a nice companion to the concert, but it’s perhaps not essential.

For anyone who enjoyed ELO back in the day, Live in Hyde Park is highly recommended. It captures everything that was great about the old group, and improves upon it. And reaction to the concert itself was so positive that Lynne has recorded a new ELO album, scheduled for release in about one month’s time: Alone in the Universe will be out November 13. Wags have labeled “When I Was a Boy,” the album’s advance single, as “Free as a Beard” (a reference to his Anthology-era work with the Beatles). I think of it more as a sort of “Real Love (Slight Return).” It features Lynne’s signature over-compressed drum sound (something that Donavan Hepburn‘s drums on Live at Hyde Park do not suffer from), so it remains to be seen how the 2015 studio version of Electric Light Orchestra will be received. A tour is being planned.