The Get Right Band: Taking Charge

Having good songs isn’t enough; to make it in the post-label world of the music industry today, artists have to supplement their musical prowess with an understanding of how to promote that music. Asheville-based The Get Right Band does indeed get it right, and they’ve been rewarded for their efforts. The rock-funk-reggae trio’s latest album is Who’s in Charge?

Guitarist/songwriter Silas Durocher and bassist Jesse Gentry have been playing music together since they were kids; they went through middle school and high school together in Maryland. They went their separate ways for college, but kept in touch and played together on holiday breaks. Eventually Durocher moved to Asheville, and when the band he was in lost their bass player, he contacted Jesse. “He was living in the Virgin Islands, and I convinced him to move to Asheville,” Durocher recalls.

Not too long after Gentry got settled in town, that band broke up. It was at that point in 2011 that Durocher and Gentry decided to start a project of their own. Jian-Claude Mears joined on drums at the end of 2013, completing the Get Right Band’s lineup. 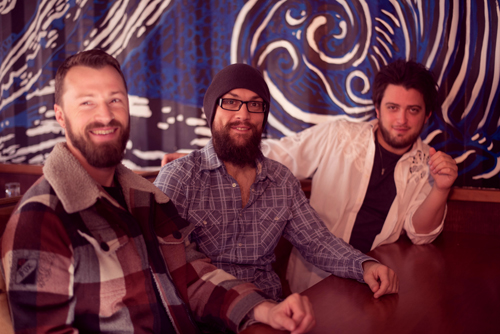 The band has its sights set on breaking nationally, and is poised to make it happen. The Get Right Band – specifically Durocher – understands that in 2016, it’s not enough to make good music: opportunities don’t appear out of thin air. So the group actively pursues situations that will help increase their exposure and grow their fan base. Locally, in the past year, their efforts got them a gig opening for former Jethro Tull guitarist Martin Barre, and a spot as featured entertainment at the Music Video Asheville awards gala.

The Get Right Band’s national aspirations got a big boost in April when they performed on NPR’s prestigious World Cafe radio program. They’ve been covered in Relix Magazine, and their last music video garnered more than 100,000 views. Durocher believes the group is “poised to break out on the national scene; we’re approaching the tipping point.”

The title track on Who’s In Charge? is an effective blend of rock and reggae, a distant cousin to Led Zeppelin‘s own 1973 reggae pastiche, “D’yer Maker.” And “Requiem for the Chemical Memory” shifts between reggae and a kind of progressive rock vibe. While some songwriters identify their work as belonging at a specific point on the head/heart continuum, Durocher notes yet another dimension. “My publishing company is called Head, Heart and Hips Music,” he says. “We try to engage all three of those things in our music.”

Bassist Gentry believes the group’s music puts slightly more emphasis on the heart part of the equation. “When Silas brings a song to the table, it’s definitely heart-centered. It always feels good.” He believes the Get Right Band’s songs are miles away from math-rock, even though listeners will find a 9/8 time signature here and there.

In line with their goals of creating a professional product, the group chose Echo Mountain Studio to record their follow-up to 2014’s Bass Treble Angel Devil. Julian Dreyer, who co-produced Who’s in Charge? with the band, raves about the experience. “They continually surprised me with their musicianship, grace [and] artistry,” he says. Calling it some of the best work he’s even been a part of, Dreyer describes Who’s in Charge? as “an album, not a collection of songs. The long and short of it is that this was one of my best experiences creating and recording music.”

Both on Who’s in Charge? and in live performance, the Get Right Band’s songs are musically focused and tightly structured. So it comes as something of a surprise when Gentry makes this admission: “We are a jam band. I fought it for years. I’ve always liked groups that are more song-based, but that let loose.” And he believes that’s a good description of the Get Right Band’s aesthetic. “You can jam as much as you want,” says Durocher, “but you’ve always got to bring it back to the song. And doing that brings everything together.”