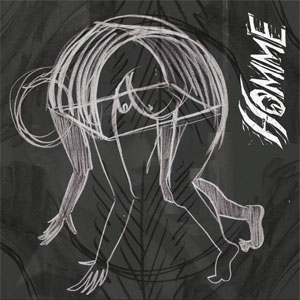 File Next to: KT Tunstall, The Roches, Radiohead

With electric guitars (run through a Leslie speaker cabinet and other assorted effects) and close yet vocal-acrobatic harmonies, the experimental yet inviting sonic approach of this Chicago duo suggests an otherworldly combination of Nirvana and The Roches. Just when you think they’re going to be some kind of parlor-room arty act, swirling backward guitar and stomping bass and drums come crashing in, shattering the reverie. Homme’s strategy is to lure listeners in with a fetching melody and arrangement, and then – at least some of the time – bludgeon them with unexpected rocking-out. Their knowing musical use of shade and light makes the jarring changes welcome. Singer-songwriters Sima Cunningham and Macie Stewart combine cleverly-edited vocalizations – check the bridge on “Fingerprints” – with alluring melodies, and save for a guest guitarist on one track, they do it all themselves.