From the archives: I interviewed the Scottish songstress for a 2007 cover story in a now-defunct print magazine called Skope. Here’s that feature.

“I haven’t seen it really recently, but the times I’ve watched it, I still shit myself thinking I’m going to make a mistake.” 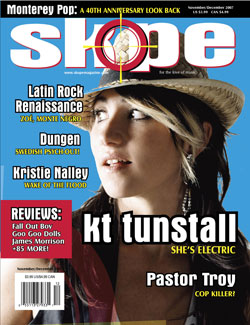 KT Tunstall is referring, of course, to her now-legendary October 2004 UK television debut on Later with Jools Holland, where she performed a solo tour-de-force of her hit “Black Horse and Cherry Tree.” Watching the clip even today, it’s breathtaking, really, to see her build the song out of a few elements, and to do so under the pressure she did. Cutaway reaction shots show a slack-jawed Anita Baker, and a suitably impressed Robert Smith (The Cure) among other costars on the program. “I was flabbergasted–and remain so–at how much it engaged people,” Tunstall observes.

Engage it did. That last-minute addition to the program’s lineup changed the career of the then-29 year old. Her debut album Eye to the Telescope has since sold more than 4 million copies worldwide. Her stopgap (but still legitimate in its own right) follow-up release, 2005’s KT Tunstall’s Acoustic Extravaganza solidified her position in the critical and marketplace arenas, and put to rest any notion that that she was a mere pretty face and voice.

On September 18 [2007] her “proper” second album Drastic Fantastic was released worldwide to great anticipation. Boasting a more fully realized rocking sound, Drastic Fantastic shows a quality artist who continues to take chances and evolve musically. As KT geared up for a world tour that would take her to many new places (including New Zealand, Australia and South America) I managed to catch up with her in Italy, moments after she finished yet another press conference.

The rock elements in KT’s newer songs might surprise listeners who fell for the mostly acoustic-based tracks on her first two discs, but for her it’s not such a radical departure. “Electric guitar has always played a part in my life. I played electric quite a lot in a band before I made Eye to the Telescope,” she explains. That album “was more deliberately ‘rootsy,’ more of a singer/songwriter sort of record. And that just naturally took me back to the acoustic. But electric guitar by nature is a harsher sound; it’s a more abrasive and aggressive. I didn’t have any structure of formula of what Drastic Fantastic should be; I just got some songs that related to each other somehow. I didn’t want to be hemmed in by any particular style.” 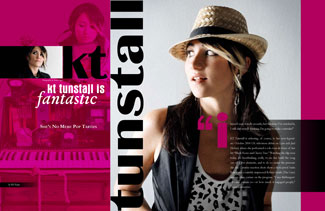 And it boasts a wider musical palette. From the poppy (and vaguely Latin-feeling) single “Hold On” to the not-unlike-The Pretenders “Little Favours,” the album is varied, yet KT through and through. “I wanted this record to be more related to my live show.” She notes that on the first tour fans commented that her live material was different from the album. Partly from the demands of playing to larger audiences (larger, certainly, than the busking gigs upon which she built her career), her shows had “already started to encompass more electric guitar. The songs from Telescope mutated a lot onstage.” She also allows that she became “more capable playing electric guitar” through live performance.

KT takes production values seriously. And she knows what she likes. “I was inspired by Carole King‘s Tapestry; it’s a really open, friendly, inclusive, very generous record. She doesn’t close you out, ever. And I really love that.” Even on the more-rocking Drastic Fantastic, Tunstall remains true to that ethos. She has chosen Steve Osborne to handle production on all of her material so far. In addition to expertise (he’s produced U2, Happy Mondays, Ocean Colour Scene, New Order etc.) he brings perspective. And in KT’s words, he is “a formidable doctor of groove. He will not accept anything less than groove perfection. And that doesn’t mean technical perfection,” she stresses. It’s got to feel right.” And KT admits that before working with Osborne, “I didn’t always know what that meant.” 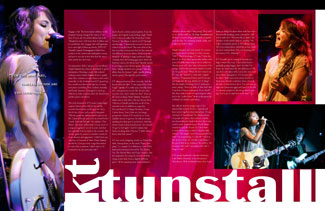 KT uses some intriguing sounds on Drastic Fantastic. Among them, on the track “Paper Aeroplane,” is a sample of a Mellotron (a late 1960s keyboard instrument favored by The Beatles, Yes, The Moody Blues and King Crimson). But her inspiration for using the distinct, wobbly string sound came from a slightly different place: “all the amazing music from children’s television shows when I was young. They used to use all that stuff on The Magic Roundabout and all these eccentric, drug-addled kids’ programs from the late 70s. Amazing sounds, really…and it takes me back to that.”

Drastic Fantastic is not very trendy; it’s contemporary, yet there’s nothing on it that screams “2007.” That’s by design. KT says, “I hate the idea of an album that’s gonna date within a few years. It’s really depressing to me to realize an album’s gone ‘off color’ after a few years of listening. And for the most part, timeless sounds are the good ones.” When she first started out, KT says she “wanted to work with a digital producer. Programmed beats, and I’d just put my songs over the top…[that] sort of thing.” But she laughs, betraying a bit of embarrassment, saying, “there’s so little of that stuff that I can bear to listen to anymore. It’s so dated!” She does make a point of expressing her affinity for the “really clever” work in that genre by Leftfield, DJ Shadow and others. 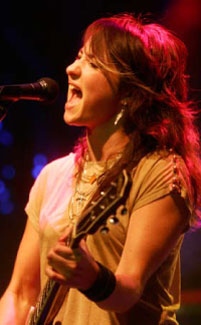 She tells me that her songs come to her almost fully formed. For her, “melody and lyrics arrive together; they always have. It’s my ‘moment of synesthesia;’ I’m always jealous of people who hear colors and see sounds; my closest thing [to that] is the fact that I only need to write down my lyrics. They’ll always remind me [of] the chords. So I don’t have to write down music–which I find horribly tedious.” She laughs, “and I’m very grateful for that!” On songwriting, KT says she “trusts in the system I have; it’s a bit like a lava lamp–the good ideas keep coming to the surface. I’m trusting in the stuff I remember; the stuff I forget is crap.”

KT’s steady boyfriend [now husband–ed.] is also her drummer, Luke Bullen (formerly of Joe Strummer’s Mescaleros). With worldwide fame, does it put strain on things for them when male fans and–theoretically speaking, music journalists–fall in love with her? “Theoretically, of course,” she chuckles at this writer’s lack of subtlety. “No. Luke’s remarkably placid on the jealousy front. He’s very independent, which has in turn made me more independent. He’s very trusting, and has reason to be, definitely.” 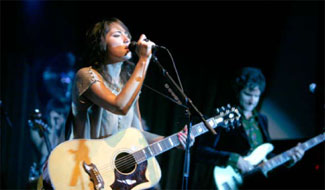 KT Tunstall’s act is coming to intimate-yet-larger venues this tour. “I know that they’re gradually getting bigger. And I feel like I’ve learnt my way toward the size differences.” She says she’s very taken with a story she once read about Bruce Springsteen. KT recounts that the Boss “didn’t move into arenas for two or three years after he could have done. He took the time to learn how to do it. You can’t just go right into [arena-size gigs] and expect to be able to entertain people for the money they’re paying. You’ve got to learn how to do that.”

and get notified when new features, reviews and essays are published.