Album Mini-review: The Turnback — Are We There Yet? 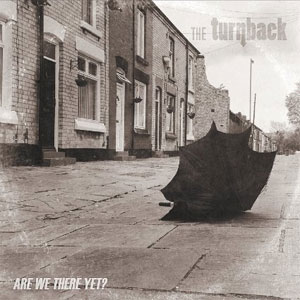 Big, roaring guitars that recalls Foo Fighters as much as Cheap Trick are the calling card of the supremely melodic sophomore release from this New York City-based trio. Highly charged close harmonies are supported by muscular, no-frills backing that is catchy without making any obvious concessions to crass commercialism. Each of the disc’s twelve tracks – eleven originals and a soaring remake of The Beatles‘ “Tomorrow Never Knows” – packs enough variety into its grooves to keep things musically interesting, yet the songs are all built around strong hooks designed to ensnare themselves in listeners’ minds. Are We There Yet? deftly balances heaviness with a broad-grin power pop aesthetic. Even when they slightly slow the tempo (as on the melancholy “Unmotivated”), the energy never flags. The album is a welcome reminder how how much can be accomplished with guitar, bass, drums, and vocals, and without keyboards and fancy production trickery.