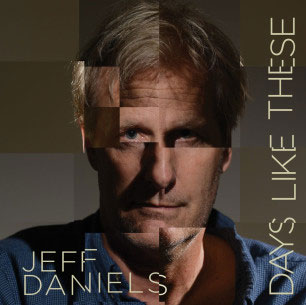 Not only is Jeff Daniels a screen and stage actor and a playwright, but he’s an accomplished musician with six albums to his credit. He is currently touring in support of his latest, Days Like These. Just ahead of the Asheville NC date, we had a conversation about his music and how it fits into his busy life. – bk

Bill Kopp: It occurs to me that one one level, acting is about giving life – albeit through your own sensibility – to the work of someone else: the playwright or screenwriter. And it’s often collaborative, working closely with a director who has his or her own ideas about how things should turn out. But a songwriters can – if he wishes – work completely alone and guide his vision from spark of idea all the way through to finished song, finished album, live performance. So in that way, acting and music are two very different things, which may be why so few people do both. How for you are acting and music similar, and how are they different?

Jeff Daniels: I have seen a lot of stars far bigger than I am who have kind of bristled at that. They want to get in the editing room, and they want to get their hands on what the next shot is on the storyboard. They want control, creative control, of what’s going to be seen. If you don’t have that, you end up giving the performance to someone else, and they for months on end do whatever they’re going to do with it. And you hope that it comes out in some kind of form that makes sense. But it’s not in your hands.

Certainly, walking out with a guitar, and having written it and directing it, and having chosen the set list and how it’s going to be performed, there’s no one else to answer to. No one but yourself. But there is a collaboration with the songs and the songwriting and performing, and that’s with the audience. And I learned that from the theater: you have to have a connection with the audience from the moment the play starts to the moment that it ends, and you’ve got to hang on to that. So the writer and the director are constantly refining that, so we don’t lose them.

And it’s the same thing with a song. If you’re up there singing a song that only means something to you, then you’re navel gazing. And I’ve always tried to pay attention to keep the connection with the audience. Whether it’s the funny setting up the sad, or vice versa, you’ve got to hang onto that connection. If the material doesn’t retain that connection, it gets cut.

BK: Now a flip side to that question, if you don’t mind. You’re a playwright, so you’re writing parts and dialogue for actors, and I would think that you often have very specific ideas about what the actors should do, as well as when and how they should do it. But as far as music, most songwriters that I’ve interviewed tended to at least pay lip service to the idea of allowing their fellow players space to come up with their own musical ideas within the song. How do you see your roles as playwright and songwriter as similar, and how are they different?

JD: You try to give the play to [the actors]. It’s part of what I learned in the film end of things. It took a lot of plays for me to learn that once you give it to them, it’s no longer just yours. You can get too specific with actors; it’s a trap. And I fall into it sometimes. But having acted, I try just try to say, ‘Here’s the play; I look forward to seeing what you do with it.’ I will come in at some point to steer the Titanic away from the iceberg.

If you get the right people – and at the Purple Rose Theater Company, I do; Guy Sanville is the director of all my stuff – then you’re in good hands. It’s more my problem to just shut up and let them do what they’re going to do with it. And you know what? They might make it better. To be patient and wait is the hardest thing for a playwright to learn. I’m still learning it.