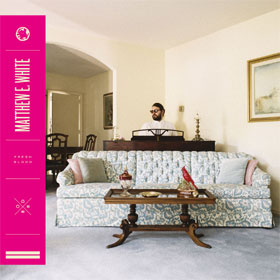 Matthew E. White has been musically active for many years, including collaborations with Megafaun and the Mountain Goats and three albums with avant-jazz group Fight the Big Bull. But as an artist recording and touring under his own name, he’s a relative newcomer.

The story making the rounds is that White’s debut – 2012’s Big Inner – wasn’t really intended as an album at all. White recorded the collection of songs to demonstrate the capabilities of the Spacebomb House Band and his record label of the same name. That record caught on with critics and listeners alike, and effectively launched White’s career as a name artist. “I think that story has gotten lost in translation a little bit,” says White. “By no means is Big Inner a ‘demo’ in the sense that we didn’t work as hard on it as we might a normal album.” White makes it clear that the album is intended as “a purposeful and intentional personal artistic statement.”

The success of Big Inner did attract some high-caliber artists to the Spacebomb label, most notably singer/songwriter Natalie Prass. “I try to be successful both personally and with the Spacebomb team,” White says. “And I work pretty hard on both of those things.”

Born and raised in Virginia Beach, White grew up listening to pop music. “I listened to Chuck Berry and Beach Boys as a little kid, Pearl Jam and Soundgarden in middle school, and all kinds of stuff in high school: good and bad,” he recalls. He discovered jazz while in college, and subsequently “really went back, started at the beginning, and connected it all.” The result of his talent filtered through those influences is music that’s tough to describe. “If I have to say one thing, I say ‘soul’ or maybe ‘r&b.’ But I know that’s not quite right. Sometimes,” he laughs, “I say ‘gentleman’s psychedelia from the New World.’” I suggest that to my ears, he’s sort of a cross between Isaac Hayes and Berlin-era Lou Reed. He smiles and says, “I’m just going to start saying that. Perfect.” 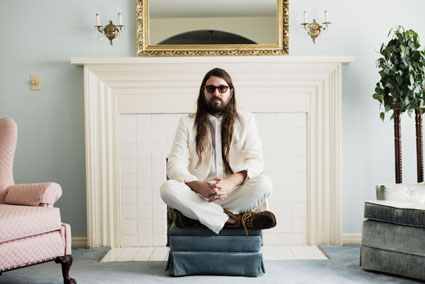 On the just-released Fresh Blood, White builds upon the sonic foundation established by his debut. He concedes that he didn’t want to repeat himself musically. “But at the same time, I don’t believe in just changing variables and setting a completely different course. There’s a vocabulary that I’m working on, and I want it to develop.” On Fresh Blood, White sought to create an album that “contain[s] bits and pieces of old vocabulary as well as pushing the language farther into something new.”

On both records, there’s a lush, dense and richly layered texture, in part the result of the sonic effect of the large Spacebomb House Band. But White’s touring band is four musicians, including himself. “Obviously we have to adapt [arrangements] a little bit,” he concedes. “But to me, the songs are the centerpiece of the record. And in the live show it’s the same.” He prefers not to think of studio work and live performance as connected. “They are such different mediums that interact with people, budgets, administrative details and cultural context so differently. To make decisions on one based on the other limits both,” White believes.

Matthew E. White’s records feature strong hooks and melody, yet one word that comes to mind when hearing them is subtlety. “Well,” White chuckles, “the live show with the band isn’t so subtle, that’s for sure. It’s much more direct than the album is.” He goes on to say that the records’ subtlety is “less purposeful than it seems, actually. There are a lot of times when I think I’m being pretty direct and it’s taken as being much more subtle than I think it is. I think I’m just calibrated a little differently in that way.”

An edited version of this feature appeared in Mountain Xpress Magazine.