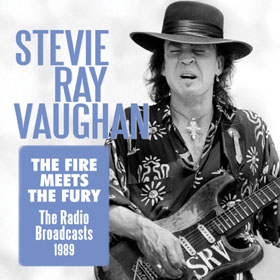 To a lot of people in the 1980s, Stevie Ray Vaughan was the guitar hero they had been looking for. Seemingly bursting on the scene without warning, the Texas guitarist had in fact been paying his dues for some time, and he was quite well known locally and regionally. His pre-fame activities included a stint in a band called the Nightcrawlers, where he was lead guitarist but not lead singer; that task was ably filled by bassist (and later songwriting collaborator) Doyle Bramhall II. That band recorded an album that remains unreleased to this day.

Vaughan went on to more acclaim, eventually capturing the notice of David Bowie. Vaughan played lead guitar on the blockbuster album Let’s Dance, and was in rehearsals with Bowie and band to play on the subsequent tour (bootlegs of these rehearsals do exist). As one story goes, Bowie forbade band members – especially SRV – to do interviews about their own work while on the tour, and so Vaughan, having just finished recording his debut Texas Flood, quit the band days before the tour was to begin.

Vaughan’s albums were released to greater and greater acclaim (and sales), and he can rightly be credited for ushering in a new era of appreciation for hotshot guitarists. But as his fame grew, so did his problems with drugs and alcohol. By the time I first saw him in concert (November 7, 1985 at Atlanta’s Fox Theatre), he was in the depths of addiction, yet he showed signs of having turned a corner of sorts: throughout the show he was uncharacteristically loquacious, making repeated comments of a positive and uplifting nature. Mere months after this date, SRV returned to Atlanta, this time not for a concert but for a four-week rehab program at Peachford Hospital, mere blocks from my home (no, we never saw him around the neighborhood).

Newly clean and with a markedly improved attitude toward life, Vaughan’s playing only improved, and his stature grew further. By 1989 he was taking part in a co-headlining concert tour with Jeff Beck; the tour was billed as “The Fire Meets the Fury.” The shows consisted of a set by each of the acclaimed guitar slingers, and often ended with them appearing onstage together for an encore.

Near the end of the tour were dates in Albuquerque, New Mexico (November 28) and Denver (November 29); both were recorded for broadcast on the Westwood One radio network. Highlights from those two shows are collected on The Fire Meets the Fury, a new single-disc live concert set. (The error-filled liner notes erroneously refer to these dates as the tour’s final performances when in fact two more dates – Los Angeles and Oakland – followed.)

While none of Stevie Ray Vaughan’s onstage collaborations with Jeff Beck are featured on the set, The Fire Meets the Fury nonetheless represents an excellent live document of SRV’s playing near the end of his life (he’d perish in a tragic helicopter accident nine months after these dates). The compilers have wisely chosen not to duplicate songs from the shows, so the finished disc (six tracks from New Mexico followed by five from Colorado) approximates a full concert set.

Vaughan and band – which by this time included keyboardist Reese Wynans alongside mainstays Chris “Whipper” Layton on drums and bassist Tommy Shannon – are in fine form throughout, and the set list runs the gamut from the hits (a very brief opening run-through of “The House is Rockin’”) to the classic covers (“Superstition,” a song that Stevie Wonder had originally written for Jeff Beck; and Jimi Hendrix‘s “Voodoo Chile”). The Hendrix cover in particular is an extended affair, running in excess of eleven minutes. Another long cut is “Life Without You,” wherein SRV engages in a monologue about his journey to sobriety (the title of his then-current album In Step was a reference to his working through Alcoholics Anonymous’ twelve step program).

While there are other live albums in the man’s catalog (1986’s Live Alive and the 1983 Albert King collaboration In Session, to name two of the most well-known), the well-recorded The Fire Meets the Fury is the only officially released document of late-period Stevie Ray Vaughan.

Note #1: There also exists a promo-only CD issued by Epic and also titled The Fire Meets the Fury; compiling then-current and back-catalog studio tracks from both Vaughan and Jeff Beck, it was intended to promote the then-current tour and should not be confused with this release.

Note #2: This album was also released in the UK as a 2LP (vinyl) set with the same track listing, featuring tracks from the Albuquerque show on one record, and the Denver performance on the other. My review concerns the CD release.