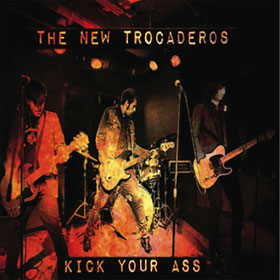 The New Trocaderos – Kick Your Ass EP
This EP is three songs, one featuring each member of this trio (joined by a keyboard player and drummer). “Real Gone Kitty” is rootsy rock (a la Jerry Lee Lewis) crossed with the Sex Pistols at their most tuneful (no, really). “Dream Girl” is sixties janglepop, sort of Jackie DeShannon meets Smithereens, with a delightfully Al Kooperish organ solo. “Brain Gone Dead” is Clash-style speedy punkpop, though the guitar and electric piano solos come from other places in rock history. Overall, it’s as varied as can be in only three tunes. That begs the question: musically, who are these guys?