Everything Comes Together: The Paul & John Interview, Part Two

Speaking of the process of songwriting, the songs on The Paul & John‘s Inner Sunset are truly the product of a collaborative approach between Paul Myers and John Moremen. “When we originally started working on The Paul & John stuff, Paul was writing lyrics for some of my music,” explains Moremen. “Then we decided to try a few face-to-face, and those were fantastic. Things were going so well writing this way that we decided to scrap the old original tunes and basically rewrite the album.”

“While John graciously deferred all the lyric writing to me,” Myers says, “we wrote all the music 100% together. We made a rule that, even though either of us could probably start and finish entire songs, that wasn’t what The Paul & John was about.” Moremen adds, “Usually Paul or I would have a little piece of something, but that would just be the kindling to get the fire started. Often the original idea would be unrecognizable by the time the song was finished.”

Since the pair had, in Myers’ words, “opted to only record songs where we had a chance to collaborate on all the music,” the songs bear the distinct character of their collaborative approach. “On ‘Hungry Little Monkey,’ John had made a GarageBand recording of the verse chords and melody, then I took that home to my studio and pasted in my original musical idea for the chorus. It was like Frankenstein’s monster, but it really worked. That’s one of my favorite songs now.”

The pair crafted all of the sounds on Inner Sunset without the enlisting of outside musicians. Moremen handled guitars (more often than not, the lead parts) plus drums and vocals. Myers played guitars (usually, but not exclusively, rhythm parts) plus bass guitar, vocals, and Mellotron-like “string” keyboard sounds. Moremen says that a goal of upcoming live dates to promote Inner Sunset will be to keep “the vibe of the performances… as close to the album as possible.” In practice that means The John & Paul will stick to guitars and vocals, joined by players from a pool that Myers characterizes as “a lot of talented friends locally here in the Bay Area, and all over North America. There’s a lot of potential there to have unique backing lineups in different cities.” In addition to a bassist and drummer, they’ll feature “two extra players to help on the big background vocals, and to play percussion and other things that we overdubbed in the studio,” says Myers. “I think,” says Moremen, “with the addition of the multi-instrumentalist and the extra harmony, we should have all the parts pretty well covered. We put quite a bit of four-part singing on the album, so that was important in considering the live thing.” 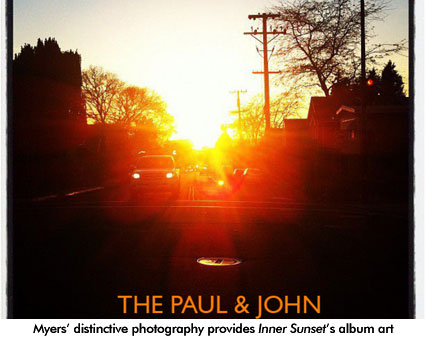 When the label “power pop” is mentioned in connection with their music, the two men offer distinctly different responses. “I’ve never been a fan of the term ‘power pop,’” admits John Moremen. “To me, it does seem limiting for music such as this. We love The Beatles, and we love it loud just as much as the last power popper. I feel that our influences are diverse; that’s where I can see the difference between us and a band that would be called power pop.” He’s not adamant about the issue, however. “It doesn’t matter too much, though. If people dig what we’re doing and they call it power pop, it’s actually fine with me!”

Paul Myers takes a view that puts the subject in some historical context. “Fifteen or so years ago, when major labels were courting bands like ours, a lot of these bands felt ghettoized by the term ‘power pop,’ like it meant ‘lightweight’ or bubblegum. The labels hated the term, and good power pop bands had to kind of keep it under their hats. I never backed away,” he admits, name-checking a who’s-who list of artists who’ve suffered (or proudly worn) the power pop tag. “I always loved Cheap Trick, XTC, Squeeze, Big Star, Badfinger, Wings, Raspberries, The Who, Jellyfish, Teenage Fanclub, and too many more.” Myers smiles and says, “If there’s a power pop revolution, you’ll find me marching out front, head and banner held high.” And The Paul & John deserve mention in that list: Inner Sunset‘s standout track, the swoonworthy “Everything Comes Together” is as good as the best from any of those groups.