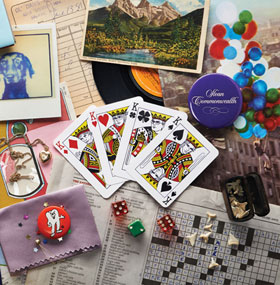 Rock fans who fall into a certain age bracket may recall the buzz around the release of Liz Phair‘s major-label debut, 1993’s Exile in Guyville. As the popular story went, the album was a track-by-track feminist response to The Rolling Stones‘ 1972 double LP Exile on Main Street. Or something like that; on close examination, the argument didn’t hold up. But the album was superb, regardless.

I’m not here today to convince you that Sloan‘s Commonwealth is the Canadian quartet’s answer to The Beatles‘ self-titled 1968 double LP. But surface similarities do exist.

First off, the new Sloan album is divided into four sections. All four members of the band compose, play and sing, and rather than mix things up (like, say, John and Yoko did on Double Fantasy), each member gets his own side (the album is available on vinyl, though my review copy is a silver CD). Each songwriter gets thirteen to fifteen minutes or so to present a suite of songs that display his own distinct personality and perspective. But here’s the kicker: unlike the white album, where some tracks featured only Lennon, and others might even have Paul McCartney behind the drum kit(!), on Commonwealth, the all-for-one/one-for-all approach means that each side finds the composer/vocalist ably and enthusiastically backed by his band mates. Commonwealth is that rarest of albums: a series of tracks from distinct individuals, all presented in a way that makes the disc into a cohesive whole.

The first five songs are labeled Diamond Side and are composed by Jay Ferguson. Sounding a bit like Belle and Sebastian, Ferguson’s songs – most notably the lovely midtempo “Three Sisters” feature clever flourishes that might remind listeners of Ringo Starr‘s Revolver-period drum fills. Each of the tunes is generally built around a piano melody, but plenty of muscular lead guitar is woven into the arrangement. The five tunes segue smoothly into one another; let your attention slip a bit and you might miss the transition to the shimmering “You’ve Got a Lot on Your Mind.” The band ups the tempo and energy level for the infectious vibe of “Cleopatra.” Guaranteed ear candy, Ferguson’s songs alone plus filler would equal a very, very good album.

Chris Murphy‘s Heart Side is next. His “Carried Away” may well be the most soaring tune on Commonwealth, but he and his band mates offer strong competition. A lovely string section leads into a chorus you won’t soon forget. With its elegiac piano and cynical lyrics, “So Far So Good” sounds like something off John Lennon’s Imagine. More of those wonderful drums-down-the-stairs fills, Leslie’d lead guitar and creamy ahhh vocal harmonies make it a standout track. The stuttering beat of the brief “Get Out” distantly recalls George Harrison‘s “Old Brown Shoe.” The melancholy “Misty’s Beside Herself” is full of beauty and heartbreak. Murphy rocks out on his last spotlight track, “You Don’t Need Excuses to Be Good.” The minor-key number features a lengthy but stinging riff as the basis of its chorus. It’s a rare songwriter who can compose ballads and rockers of equal quality, and then sequence them on an album in a way that isn’t jarring, in a sequence that makes sense. Murphy succeeds.

Shamrock Side features four songs from Patrick Pentland. Right out of the gate he serves up “13 (Under A Bad Sign),” a rocker that swaggers like T. Rex. Wonderfully distorted guitar fills leave the listener wanting more. Some bursts of noise and what initially sounds like the same backing track used on “13” lead straight into “Take it Easy.” Even more distorted, nearly atonal guitar skronk atop the chugging, insistent rhythm section brings out the rock in Shamrock Side. “What’s Inside” is a slow, gauzy, almost psychedelic swirl that is highly appealing and will draw listeners into its musical maelstrom. Pentland’s side wraps up with the Rolling Stones-y “Keep Swinging (Downtown).” Some wonderfully retro combo organ textures recall the mid 1960s garage scene, and a brief effects-laden guitar solo is yet another highlight.

Commonwealth ends with Spade Side, an eighteen-minute suite of Andrew Scott compositions all woven together under the singe title “Forty-eight Portraits.” The opening section could – if one wishes to labor the white album comparison – be thought of as Commonwealth‘s “Revolution #9.” Found sounds (barking dogs, alarm clocks, out-of-tune parlor piano) unfold gradually, and then the piano rises from the aural mist, seamlessly unfolding into a beautiful melody topped by some tight dual lead vocal harmony work. While none of Scott’s melodies sound like lifts, there’s a definite Abbey Road (Side Two, specifically) vibe to the mini-songs; the manner in which they hang together only strengthens the similarity. Had he cared to, Scott could have easily extended any and all of the brief “songlets” into full-length numbers, creating an entire excellent album in the process. It’s a testament to the democratic approach of Sloan that he and his band mates chose otherwise. The thirty-second section that begins around the 11:20 mark is perhaps the hookiest segment of “Forty-eight Portraits,” but there’s not a weak moment in the entire track. Around 12:15 Sloan take us back –albeit briefly – to the Summer of Love, with insistent piano and brass that backs the vocal countermelodies. Then there’s a bit that recalls the weary yet jubilant rooftop vibe of “I’ve Got a Feeling,” featuring some children’s chorus vocals that recall early Traffic, XTC and the Rolling Stones all at once. The song then gradually takes off into the ether, explicitly recalling either Abbey Road‘s “I Want You (She’s So Heavy),” Badfinger‘s “Timeless,” or – most likely – both.

And then it’s over. Luckily you can play it again. And you’ll want to. Commonwealth truly displays the common wealth of songwriting prowess among Sloan’s four very equal members. Easily a strong contender for Musoscribe’s best album of 2014, Commonwealth earns my enthusiastic Must Buy recommendation.