Album Review: The Mamas & The Papas – A Gathering of Flowers 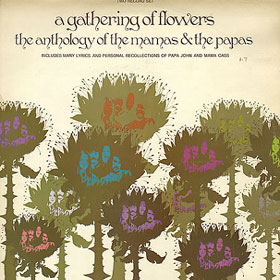 By my rough count, there have been more than twenty – yes, twenty – compilations attempting to distill the catalog of The Mamas & The Papas down to a disc or two. For me, the 1969 LP 16 of Their Greatest Hits was my introduction to the group. And while it was good – hell, they’re all good, seeing as they feature the foursome’s AM radio hits, among the best of the sunshine pop genre – it wasn’t the best single-disc summation of their music. That honor goes to the long out-of-print A Gathering of Flowers. Released in 1971, two years after the group petered out, it not only includes their biggest hits (“Monday, Monday,” their Beatles cover “I Call Your Name,” the scintillating “I Saw Her Again Last Night,” and of course “California Dreamin’”) but it also features some lesser-known but equally worthy album tracks.

Yet that’s not what makes A Gathering of Flowers – newly reissued for the first time on CD by Real Gone Music – a treasure. No, that’s thanks to the snippets of interviews with the group’s members that are interspersed between the tracks. Artfully done, the mixing of spoken passages and music makes for a sort of audio verité document of the group, and in doing so, captures their vibe – happy, melancholy and all points between – better than any other collection. Essential.