Zombies Among Us: A Conversation with Rod Argent and Colin Blunstone (Part Three)

One thing that has changed – somewhat – is Rod Argent‘s keyboard arsenal. “I would only ever use my real [Hammond] C3, a Leslie [rotating speaker], and a beautiful Steinway concert grand piano in the studio. When we are recording an album, that goes without saying.”

“But,” Argent admits, “on stage, it’s so convenient and so reliable to use the new modules. I think that onstage the Hammond XK3 holds up really well. It’s obviously about a tenth of the weight of a real Hammond organ. I have memories of those days of when I would help huff that ’round myself! I couldn’t play for two hours because my forearms would hurt so much. I mean, it’s a bloody nightmare. And it would go wrong about once every two nights because they are not made to be thrown around the world.” He adds an amusing vignette: “The first time I came to the States with Argent, we brought our English one over, it came up on the [baggage] carousel. The whole thing came up on the carousel, like a huge theater organ!”

When seeing the band live today, a common reaction among audience members is, “Oh, gosh! I forgot they did that one!” Another is the look of sheer joy on many faces in the audience. I ask Colin Blunstone and Argent if they get a sense of that feedback when they’re up on stage.

“I always get a sense of that,” says Argent. “I always ask that instructions be given to the lighting people not to put the audience in total blackness. I don’t want them to be brightly lit, but I like to be able to just catch people’s reactions and movements so there is a real feeling of interaction between us and them. In the middle of this tour I am going to be 69, and I can’t believe it. But when we are on stage, it feels 100% the same as when I was 18 years old. That is such a privilege and it does not happen in many professions. And I love it.” 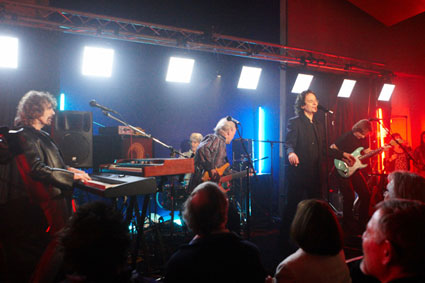 “You definitely do get a sense of it,” concurs Blunstone. “If you have an enthusiastic and supportive audience, that’s why performers want to perform. That’s what we do it for, really. It really lifts you, and it’s a completely different experience to that of playing somewhere where you’re not very well known, with a very quiet audience. You have to sort of work a lot harder to get a good performance in a situation like that. It’s incredibly important that you have that enthusiastic audience. It’s very easy when you go out onstage to a wonderful audience; they do it for you.”

The group are already at work on a studio followup to 2011’s Breathe Out, Breathe In. “We’ve already started recording. We’re rehearsing three or four songs, and we’ve recorded two tracks; we just did one the other day. And we’ve got one more day of recording next week. But after that, of course, we’ll be away for six weeks. Later in the summer – I think the end of June – we’ll start recording again. And we’ve deliberately kept the second half of the year quite free. So it will be a time of writing and recording.” 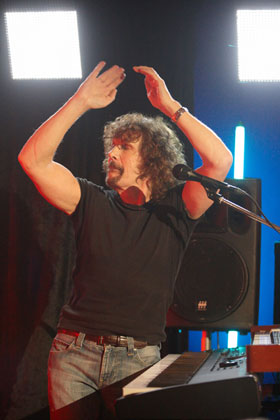 Argent elaborates, saying, “the other day, just for fun, we started doing a song called, ‘I Want You Back Again,’ which was a very little known Zombies a-side in France and was a very small hit there in 1965. And we played this original song for a very short period of time. We heard Tom Petty do it, and we thought, “This is a great song! Why aren’t we doing this?” And so we started doing it on stage. And, just for fun, ’cause we love doing it on stage so much, and we think the band sounds so good now, we wanted to capture the 2014 version. And, strange enough, when you just called me, we just had it blasted and I was just playing it through. It sounds great. It sounds so much in common with the original, but I think it sounds better. I think it has all of that fresh feeling, absolutely no overdubs at all. We recorded it live, like we do on stage. The vocal was live, everything was live but in a studio environment.”

Asked if any of the new, as-yet-unreleased material will be previewed on their tour, Blunstone is circumspect. “We haven’t been talking about that, no. But we may well play some at sound check, and if they start to sound polished, maybe we’ll experiment. We’ll be playing lots of hits and lots of newer material; I like to think that there’s something there for everyone.”

The Zombies will perform at Asheville NC’s Orange Peel on Tuesday, April 15.