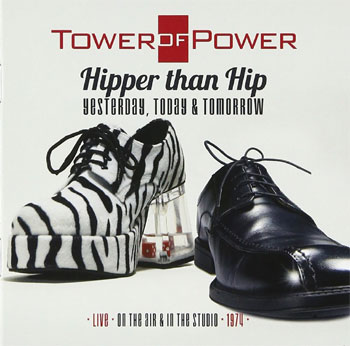 For quite a number of years – primarily the mid 90s to around 2006 – I was immersed in a consuming hobby of sorts: I collected and traded bootlegs (aka ROIOs or recordings of indeterminate origin). For me, listening to unreleased recordings of artists I like – studio outtakes, live concert tapes, radio broadcasts and the like – provided an additional window of understanding into their work, a depth of understanding often unavailable through more conventional means.

With the rise of faster internet speeds and peer-to-peer sites, the trading of physical artifacts has largely died off. In the same way that trading of those physical CDs put a practical end to the for-profit (and illegal and unethical) practice of commercial bootlegging, the end of trading came on suddenly.

But a desire for these kinds of recordings persists. And just when one thinks the unreleased cache has been completely mined, something new turns up. The latest example of this is Hipper Than Hip: Yesterday, Today and Tomorrow by Tower of Power. This 2CD set documents a WLIR radio broadcast from Long Island’s Ultrasonic Recording Studios on May 14, 1974. While Real Gone Music focuses primarily on rare and archival reissues, Hipper Than Hip is two-plus hours of previously unreleased material.

Tower of Power was (and remains) an eleven-piece band to be reckoned with. They brought the energy and fire of funk by expanding the basic rock lineup (guitar, bass, drums) with keyboards, percussion and a horn section. With Lenny Williams fronting the band on vocals, TOP tore through their tunes, giving ample spotlights to soloists. Chester Thompson‘s keyboard work is the centerpiece of many of these tracks, often engaging in incendiary dialogue with the horns (trumpet, two tenor saxes and a baritone sax).

Recorded in the studio but with a live audience, the recording is the best of both worlds: high quality recording techniques and the energy that can only be captured when the band plays in front of real human beings. The 2CD set captures the band at the height of their success, running through their hits (“Soul Vaccination,” “You’re Still a Young Man,” and “What is Hip” along with perennial favorite “Squib Cakes”) and a dozen others.

Led by founders Emilio Castillo and Stephen “Doc” Kupka (both of whom remain in the band today, along with a couple others from back in the 70s), Tower of Power provided a sort of updating of the hard-charging road bands of the swing era (Duke Ellington‘s band, for example), injecting the music with heavy doses of soul, r&b and the ever-present funk.

From start to finish, Hipper Than Hip is a thrilling document of a band and horn section at their best. Whether it’s a smooth soul ballad such as “You’re Still a Young Man” or an irresistible groove, Tower of Power delivers. The liner notes provide a bit of history and context along with some background on the sessions that produced this historic recording. As successful as the studio albums of that era were (1974’s Back to Oakland was the group’s then-current release), it was in concert that Tower of Power were best experienced. And while they did release a live album in the 70s (1976’s Live and Living Color) that contains versions of four of the numbers on Hipper Than Hip, this new 2CD set is worth having for its combination of up-close-and-personal with studio production values.