A Conversation with The Tubes’ Founder Bill Spooner, Part Three

“If I get you guitar lessons,
will you stop playing that?”

Bill Spooner: What do you know about the album? Do you know the circumstances behind that album?

BK: I’ve understood that it was done during a difficult time for the band. On the liner notes there’s a Roger Steen quote that reads something like, “If you figure out how this album fits together, call the office.”

BS: First of all, it started out as a double album, with this producer named John Anthony. His only real claim to fame was that song “How Long” by Ace. And he turned out to be a real strange guy. He would dose people with acid; he dosed the studio owner one time, put it in his coffee. That got him kicked out of that studio, and eventually we ended up locking him out, and finishing the album ourselves. 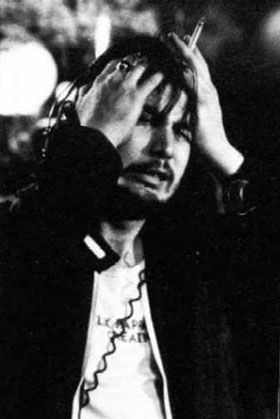 And at that point, we had spent so much time and money already, we pruned it down to a single album. So it was kinda thrown together in a weird way. It had some good songs on it, but it was generally…it didn’t hit the mark, I guess.

BK: The first track on the album was “Smoke (La Vie En Fumer).”

BS: Vince [Welnick] wrote the music, and I think Mike [Cotten] wrote the lyrics. Vince was always writing these big piano kind of…I don’t want to say Ferrante & Teicher…but big, overblown-type melodies. And it was nice; we liked it. We turned it into this sort of modern subterranean angst thing about the fragility of life. Or whatever. I guess that sounds kinda stupid.

And we had a great stage presentation for it. A kind of café or nightclub scene. Fee [Waybill] comes out as a smooth guy, and he get “whomped” by dancers wielding giant cigarettes.

BK: There are some still photos of that in the inner sleeve of the What Do You Want From Live 2LP set.

Tell me about “Hit Parade.”

BS: “Hit Parade” was a song I wrote about searching for true love. When you find somebody who really likes you, y’know? And all the myriad ways you can blow it.

And the middle-eight/bridge part had a Vince thing; that was one of his songs we incorporated into “Hit Parade.”

BK: “Strung Out on Strings.”

BS: That was pretty much the story of my life. My first guitar was one my mom got with green stamps. I don’t know if you know what those are…

BK: Sure, I do. S&H Green Stamps; I used to put ’em in the books, to save up and get stuff. When I was a kid. We never saved enough to get anything decent, though.

BS: Well, my mom was firm believer in green stamps. The first guitar we ever got, she actually got for my dad. I think I was eleven or something like that. She got me a giant model train. Christmas morning, I got up and immediately started bangin’ on the guitar, and my dad started messing with the train; he was an electrical engineer at the time. So my mom never said anything, for years. She just kinda left it like it was.

There was a popular song around that time [1957] called “Party Doll,” by Buddy Knox. It had a little solo in it [vocalizes: “neener-neener-neener-neener”], and I figured out how to play that. I’d play it over and over, and my mom finally said, “If I get you guitar lessons, will you stop playing that?”

BK: The next track on Now is “Golden Boy.” I know a little bit about that; it’s about a friend of the band, a guy who had been in The Beans with you.

BS:Bob McIntosh, right. I don’t remember if he ever made it to [being in] The Tubes, because he died of cancer when he was 24. The thing about him was that he had two and a half feet of blond hair, and he was just a monster drummer; he could make the whole building shake. He was a golden boy; really handsome, and all the chicks loved him. Totally straight; he didn’t smoke pot like the rest of us. Didn’t drink; he was…perfect. His father was an astronaut, and his mother was a professor of something or other. He was really smart kid; great genes. 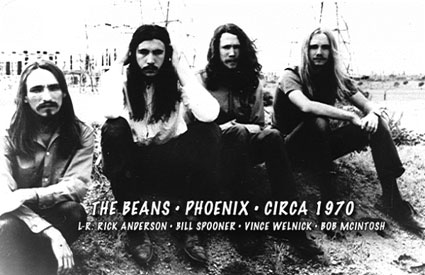 Being an Air Force kid, he was raised on all these Air Force bases. All over Europe; Turkey and all over the world. And the military is notorious for just dumping their garbage. Fluorocarbons, PCBs…they just dump ’em. And so [if you live on base] you just live in this stew of carcinogens. And that’s how he believed he got cancer. He was so healthy; he was the first person I saw that jogged, ever.

BK: The Captain Beefheart cover, “My Head is My Only House When it Rains.”

BS: Just a song we really liked. The day we recorded that…You know what magic mushrooms are, right? We all ate those. Fee played guitar on that one; and he didn’t even know how to play guitar! It was a very simple song, so I showed him this little part. And we had four or five acoustic guitars going at once. We were all even breathing together. It was a very…cathartic experience. Pick whatever word you like; it was unique.

BS: That was a wacky thing that he came up with. We thought it would have a great stage application, which it did. The title came from a TV show…I can’t remember the name of it, but it from a cartoon robot Japanese thing. One of those “Japanimation” things. A little kid would go around, and he’d be in the eye of this giant robot, where he’d control everything. The robot walked around smiting its enemies and so forth. And then the kid would scream out, “God Bird Change!” and he’d turn into a spaceship/jet fighter thing.

BK: While I’m thinking of it, how did Mingo Lewis end up in The Tubes? How did you guys find him? 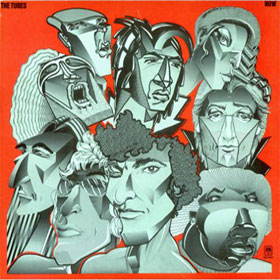 BS: He found us. We had a gig at a place in San Francisco called Bimbo’s; a really plush nightclub built in the 1940s, I think. A beautiful place with crushed red velvet curtains, waiters in tuxedos. It held about seven, eight hundred people.

We had four nights booked there, two shows a night. We thought that was really cool; we could play eight shows in a row. But after those eight shows, they were so sold-out and popular that we added another week. And another; we ended up playing six weeks in a row: two shows a night, five nights a week. We figure we played to about 50,000 people or something. That was one of the first major things we did.

As we moved into the theatre, we added more and more crap. Each night, we’d say, “Let’s add this thing over here…” And we did little vignettes out in the audience. And people would come and sit in, too. Boz Scaggs would come, John Cipollina…all the local people. Especially for the big “White Punks on Dope” finale; we’d have this army of guitar players. Whoever was there would come up and play guitar at the end.

Mingo started showing up after a week or so, bringing in a couple conga drums. And I was like, “Um, I don’t know if there’s anything that…I don’t know if this is your kind of music.” And he said, “That’s okay; I can fit into anything!”

And I asked, “Well, who are ya?” He was age 17 or 18 at the time, y’know. “I played with Santana,” he said. And I said, “I don’t know that any kids ever played with Santana!” But there were: Neal Schon was pretty young at the time, too. But anyhow, Mingo came up, and he was terrific. The audiences loved it, and he was really great. Because beside being a monster percussionist, he was a great showman.

He didn’t want to get paid; he just wanted to play. And he really liked our music. And this went on for the whole Bimbo’s run; at the end of six weeks, we couldn’t conceive of playing without him. Prairie [Prince, drummer] really liked playing with him; Prairie really missed it when Bob left. For those five formative years before we got signed, we had had two drummers. And it was like a thundering herd of elephants. And having a second drummer freed Prairie up to do some other things on drums.

Our track-by-track discussion of The Tubes’ Now LP continues in Part Four.