Bill Kopp: I understand you remained close to Drake Levin in the post-Brotherhood years. I believe you mentioned that the two of you even played music together on an informal basis in the years before his passing. Can you tell me about that?

Phil “Fang” Volk: Drake and I stayed in touch throughout his life, and of course, right up to the very end, which was the hardest for both of us. He knew his days were numbered and so did I. He lost his battle with cancer on July 4th, 2009. That’s just like Drake: going out with a bang! I’m sure he planned it that way, and held out until July 4th rolled around, so that his passing would have some sort of cryptic symbolism and impact. That was his kind of sense of humor: a little mystery, mixed with some tongue-in-cheek irony, and a dry sense of humorous morbidity. July 4th is a date that has impact.

Drake hated things that were mundane. He always looked for the package that had the best impact. Drake would always think big. That was his way. That’s why the failure of Brotherhood hurt him so deeply, because his dreams for our success were so big. He really believed in Brotherhood. It was almost an obsession. Perhaps that’s why we locked horns so often, because his vision of the band was so deeply personal that it was often very difficult to re-route his thinking, and get on board with some of our ideas. 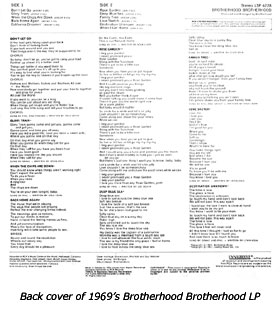 At times, he was just stubborn, but at other times, it felt to him like we were messing with his dreams, and he would dig his heels in pretty deep, and wouldn’t budge. That’s when Smitty would usually enter with the voice of reason, and help move things in an amicable direction. Drake and I were both very opinionated and strong-willed. Thank God, Smitty was a peacemaker and a cool head in the midst of heated moments.

Anyway, getting back on track, whenever I would visit Drake up in San Francisco, he was usually doing a gig with his blues band. He always had me sit in and do a few songs. Drake always admired my ability to jump on stage and turn the room around, and make the crowd sit up and pay attention. He was always very complimentary about my showmanship and the way I could connect with an audience, and make them have fun and get involved with the show… We were a good team.

Speaking of gigs, in 1997, four core Raiders from the mid 1960s – Mark Lindsay, Drake, Smitty and Fang – performed together at a 30 year Raiders Reunion Concert in Portland, Oregon. There were 10,000 people in the audience! For all intents and purposes, it was a very successful gig, and it let us know that we still had drawing power as a concert attraction.

Initially we thought we could do a few more gigs using this four ex-Raider format, but it wasn’t to be. So instead we decided to pursue a Brotherhood-type revival, simply called “Fang, Drake & Smitty,” with the emphasis being focused on our Raider legacy. We got one major gig in 1998 in Oakland, CA, at a big music event called The Zucchini Festival. It was a big success. We performed in front of about 7500 people.

Shortly after that, Smitty moved to Hawaii, which made it logistically difficult to rehearse and do gigs with Smitty involved. So, Drake and I hooked up with some other musician friends, namely a couple of guys from the The Grassroots, one guy from The Buckinghams, and fellow ex-Raider Keith Allison. So with three Raiders on stage, along with the other guys, the sound and presentation was very solid and rockin’ real good. We called this band The American Rock All-stars.

Despite extensive rehearsals to cover all the hits from all three groups, we were having trouble getting booked. I was doing most of the lead singing, but Keith picked up a few tunes, and Marty Grebb from The Buckinghams sang all their hit songs. It was a very strong band, and I was really proud of what we had put together, but we only did one gig. You guessed it – The Zucchini Festival in Oakland, California in 1999.

It was a shame that this group didn’t get more gigs, because there was a lot of talent on stage and we all liked each other and had fun together. The chemistry was great. Rob Grill of the original Grassroots sued our guys from the Grassroots for using the name, and lawyers had sent us a cease-and-desist notice warning against our using any “Original Raiders” references in our advertising. With no gigs, and the threat of lawsuits looming in the air, the band folded. Another heartache.

In the meantime, I had formed my own group during this time period, a group called Fang & the Gang. We started doing shows in 1997 and over the years have picked up gigs here and there, even doing the Zucchini Festival twice!

While in the Bay Area during some of these engagements, I would pay Drake a visit and stay at his house where he had built a recording studio. We did some sessions together, and came up with some pretty good stuff that has never been released. His health was up and down at this point in time, so our musical activities together were somewhat limited due to his health.

Fang & the Gang has kept me busy from 1997 to the present time, with recording, and doing gigs on the road, as well as several gigs right here in Las Vegas where I live. I think the last time I performed live with Drake was up in San Francisco at a club at Fisherman’s Wharf where he was working with his blues band. That was somewhere between 2005 and 2007; the date is foggy. As always, he had me come up on stage and sing a couple of songs. It was always great to feel his fantastic guitar rhythm – his groove – his “pocket.” He was solid. When it came to rhythm, he was as solid as a rock! He really knew how to lay it down, like no other… That was the best part of his guitar playing… his impeccable sense of rhythm. “The Kid” could rock!