Concert Preview: Welcome (Back) to The Machine

New York-based Pink Floyd tribute band The Machine have long made Asheville NC’s Orange Peel the first or an early stop on their annual winter tour itinerary. The group routinely attracts a packed crowd to the venue for its sound and vision spectacular, a live recreation of the music of one of rock’s best-loved and most influential bands. Once again, this week (Thursday, January 9), the four-piece band will time-travel through the catalog of Pink Floyd, unearthing rarely heard gems (you might hear “Childhood’s End” from 1972’s Obscured by Clouds) right alongside everyone-knows-the-words tunes like “Wish You Were Here.” 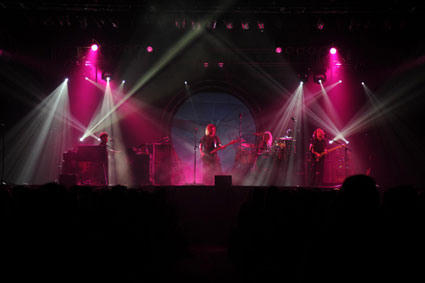 And that mix is a key component of The Machine’s appeal. The band strives to put together a set list that satisfies the people who come to hear the well-known hits, and they also manage to please hardcore fans – including this writer – who want to hear relative obscurities such as “Cymbaline.” And in some ways, that could be a real challenge: after all, The Machine is working with a body of music that hasn’t been added to since 1993. Agreeing that they couldn’t get away with playing any given little-known Floyd song every night (say, “Green is the Colour” from the 1969 More soundtrack), drummer and founding member Tahrah Cohen admits, “you can play ‘Comfortably Numb’ and ‘Shine On You Crazy Diamond’ every time. Because those songs transcend time; they’re so relevant in every way to so many people’s lives.”

Continuing on that thought, Cohen explains that for the musicians in The Machine, the goal is to “get your own ego out of the way. When you play great music, you’re just the conduit for that music. When you’re onstage and you play ‘Comfortably Numb’ for the 2000th time, and the entire crowd is going absolutely crazy, you feel alive, too. Get your ego out of the way, and let the music do the rest. It’s not that hard.”

The Machine has experienced some lineup changes since its inception in 1988. While keyboardist Scott Chasolen has been with the group since 2007, and guitarist (originally bassist) Ryan Ball has been in the band for fifteen years, only Cohen remains from the original lineup. But she views those changes as a strength, not a weakness. “Everyone who comes and goes brings something new to the group,” she says. “And it’s very inspiring. Certain people, their forte might be improvising. Some people might be better at groove-oriented playing. Some people are powerful singers.” She goes on to note that in addition to his considerable skills on bass, relative newcomer Adam Minkoff (who joined in 2012) “happens to sound unbelievably like David Gilmour.” 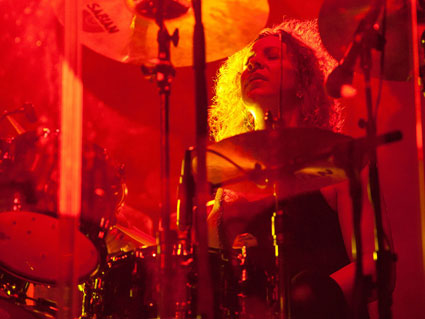 Cohen also makes the point that what the various members bring to the group is less a Pink Floyd influence than an overall musical influence, something that helps keep things fresh. And a visual approach that, er, echoes Pink Floyd helps a great deal as well. As stage personalities, Pink Floyd were never very concerned with how they looked; it was about the music and the visuals – lighting effects, projections, films, and (on the 1980/81 dates, the in-concert construction of The Wall).

The Machine takes a similar approach. The band has its own smaller version of the round “Mr. Screen,” and they use a number of motion picture visuals associated with Pink Floyd. Cohen says that Ryan Ball did “a lot of the video editing” that the band uses onstage, and notes that The Machine “keeps adding lighting effects and films to change things around” from tour to tour. And expressing a sentiment that the Pink Floyd members likely would share, Cohen notes that “it’s nice not having the pressure of being [onstage] individuals. It’s nice to be overshadowed by the music and the aesthetics.”

This week’s show isn’t the only 2014 date for The Machine in Asheville: in May the band will return for an outdoor show where they will be joined by the Asheville Symphony Orchestra, performing an orchestral/rock arrangement of Pink Floyd’s landmark 1973 album The Dark Side of the Moon in its entirety. “We have been so lucky in that we have performed with the country’s top orchestras for the past five to seven years. We’ve played with The Atlanta Symphony; Detroit’s symphony, which is renowned; Philadelphia…we’ve played with some heavy hitters,” Cohen says.

“May times when you see a band accompany an orchestra,” Cohen observes, “the orchestral arrangements are a little bit fluffy, a little bit silly. You can see Metallica with an orchestra and say, ‘Okay, that’s very cool,’ but [in our case] Maxim Moston did the arrangements for [The Machine’s live reading of] The Dark Side of the Moon. And they’re brilliant; the show is fantastic.”

And while she laughs off my playful suggestion that the group should tackle “Atom Heart Mother Suite” while they’ve got the classical players on hand, she does allow that the May 24 show will include some bonuses, among those “Set the Controls for the Heart of the Sun” and “Shine on You Crazy Diamond.”

But Floyd fans shouldn’t play games and wait for May: this Thursday’s show at The Orange Peel presents a ready opportunity to see and hear The Machine.