Though hailed in some quarters, Cody ChestnuTT‘s debut album, Headphone Masterpiece, received mixed reviews, some unforgiving. While critics seemed to agree that the R&B/neo-soul artist possesses an incredible singing voice, some harped on what they saw as the inconsistent quality of the album. Rob Mitchum, writing for Pitchfork, decried the album’s “embarrassingly juvenile, sexist psuedo-raps.” Fresh Air‘s Ken Tucker described the 2003 album as “self-indulgent, sloppy and more than a little mean,” going on to reprimand ChesnuTT for “throwing out insults at the women he claims support him.” Still, Tucker closed his review by recognizing the artist’s potential, and The Roots liked the album’s track “The Seed” enough to cover it. Their version, featuring ChesnuTT, made Top 40 charts internationally. 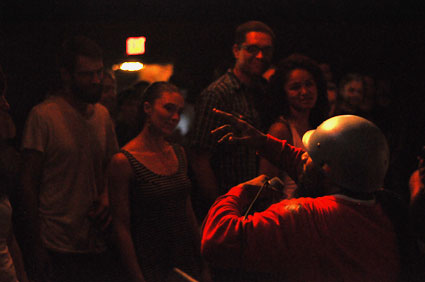 Nearly a decade later, ChesnuTT’s Landing on a Hundred marks not only his transformation as an artist but also as a human. With this new album, Cody emphasizes the importance of his work as a reflection of what he “wanted to do as a person.” With two kids growing up and already expressing their love for music, Cody has experienced a greater awareness of his values: “I wanted to be conscious of what I was saying and the language I was using… I didn’t want anyone to be excluded from what it is I had to share.”

When Cody’s daughter was still an infant, he “could hear her sort of humming along or trying to express herself through music.” She is now four and taking ballet, while her older brother is learning his first chords on the guitar. ChesnuTT ruminates on the changes in his life on “Everybody’s Brother” off of his 2012 album: “I used to smoke crack back in the day / I used to gamble rent money and lose / I used to dog the nice ladies, used to swindle friends / but now I’m teaching kids in Sunday school.” 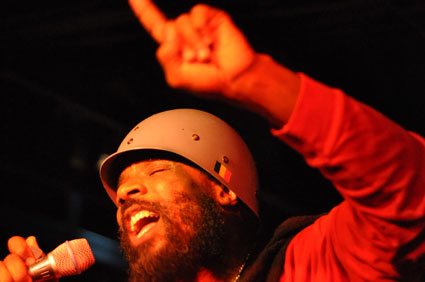 Cody employed a Kickstarter program to fund the making of Landing on a Hundred. In addition to expressing his gratitude for all of the support his campaign received, Cody says that it’s great to “get a chance to see how people are really passionate about music,” the fact that they have “the ability to support it, to help bring it to life.” This passion and emphasis on community are central to the message of Landing on a Hundred. I ask if he experienced any disadvantages to raising funds this way. “(Crowdfunding is) a brilliant concept. It helps bring life back to the creative process…and I don’t think there are really any disadvantages. It seems to be a pretty sincere exchange in the form that it’s in right now.”

If you visit the Kickstarter page for Landing on a Hundred, you’ll be greeted with a different Cody than we met back in 2003. “Landing on a Hundred. What does that mean? Landing on something truthful. Landing on something purposeful… something meaningful.” With beginnings a decade ago singing tongue-in-cheek lyrics like “all I want is pussy, give me some religion…a brand new Cadillac, a winning lotto ticket,” ChesnuTT raised over $22,000 (his goal was $20,000) from fans who got behind his matured, positive new message. 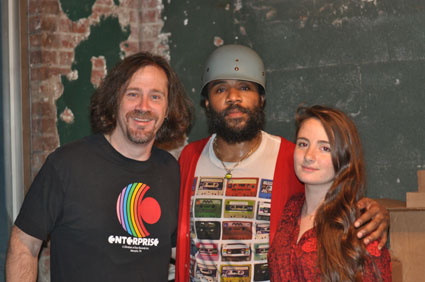 “I love writing a song and watching it come to life,” he says. He talks about his interest in the life and development of a song, saying he doesn’t really favor one aspect of the process over another. Once you bring it on tour, “you have the connection with the audience — the reaction to those songs that you spend so much time with alone, in a small place. To actually see people that are standing come in closer because of the emotion of the song — that experience is priceless.” And it happens, too. At Cody’s recent performance in Asheville NC, he invited the crowd to move in towards the stage, and it seemed natural for them to oblige. People were dancing. At several points he had the whole audience joining him in call-and-response.

Cody ChesnuTT’s performance at the Grey Eagle in Asheville confirmed what he had shared in his interview about the importance of inclusiveness in his music. You get the sense at his show that — while enjoying the hell out of performing — he is constantly aware of his audience and working to ensure a shared experience. He even took the time to address any fans that might have come hoping to hear tracks off of his debut album, lest they be disappointed. He let them know that he wants to perform things that resonate with where he is in his life, with his soul. Cody, once criticized for being arrogant and alienating, individually pointed out members of the audience during the last song of his set to show his appreciation. He thanked the audience numerous times and made himself available afterwards to meet with his fans, making it clear that he really sees himself as “Everyone’s Brother.”