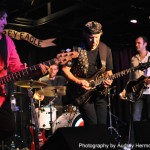 Maybe you’ve had this experience yourself: you have tickets to a show. You’re really looking forward to it. You know it’s going to be really good. Then you get there, the band comes on, and…it’s better than you expected. Way better. This happened to me last night. I am friends with the publicist who handles
Read More
A Guest Feature by Annelise Kopp J Mascis is the loudest acoustic show I’ve ever seen. During his September 28, 2014 show at Asheville NC’s Grey Eagle, J was seated onstage with two guitars nearby, and surrounded by three large guitar amplifiers. By his side were two large bottles of coconut water. For nearly the
Read More
One of the many joys of taking in a live show in Asheville is intimacy: arrive early, and it’s as likely as not that the artist you’ve paid to see will be enjoying his or her dinner (and/or a pint) at the table next to you. So it was last night at The Grey Eagle,
Read More
Austin-based band Black Angels have a finely tuned sense of history. While their music – often described by the band members themselves as “tribal psychedelic” – doesn’t aim to slavishly re-create the sounds of some long-lost musical era, the group readily acknowledges a clear debt to their psychedelic forebears. And chief among those influences for
Read More
Viewed as an entire body of work, the music of Frank Zappa is near-impossible to pin down. There are significant elements of everything from doo-wop to progressive jazz to avant-classical to blues to rock. By the time Zappa died of prostate cancer (just over twenty years ago), he had built a catalog of more than
Read More