Bill Kopp: Not to put words in your mouth, but was it a case of that as the songs would develop, you’d instinctively know who’d sing lead?

Vicki Loveland: Yeah. As we’d put them together, there would be some songs where I’d start singing, and I would look at Van after several times through and say, “Would you try to sing this? I think that you would sound better on it.” And the same thing happened with him. We wanted the best sound, and sometimes it would just naturally lean one way or the other. 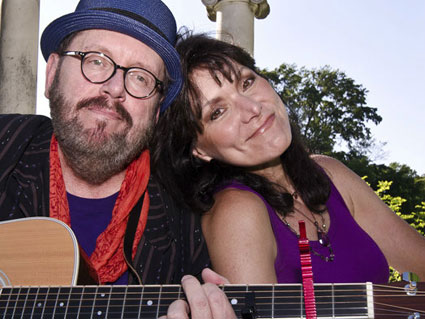 BK: What is the connection of the René Magritte painting “The Lovers” to the album?

VL: We came up with the title Bloody Cupid [a lyric from “Birthmarks”] because, y’know, Cupid can be a really lovely thing when you think about it, but love can also be pretty…you can get bruised. And these songs are more for people who’ve been through relationships, who understand that there are very high highs and very bottom-of-the-pit lows. This is a record of love songs, but it’s not all happy. And we liked the Magritte painting “The Lovers” because it has those shrouded faces. It’s kind of dark, sort of disturbing. But at the same time, they’re kissing.

Van Duren: And it’s universal, because you don’t know who’s under the shroud. You wouldn’t believe how many people ask us, “Is that you and Vicki under there?”

BK: Yes, “We commissioned Magritte to come paint that for us!”

VL: It was a visual of what the record represented to us. 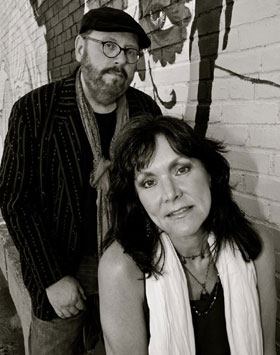 BK: The production is really bright and clean, yet not sterile. To what degree did you take an old-fashioned approach to recording – for example, being all set up and playing together — and to what extent did you use modern techniques like ProTools and so forth?

VD: Well, we did use ProTools; Pete Matthews works with it. But in his studio, he uses a lot of vintage microphones, including an RCA from the 1940s. But most of the songs started with me playing guitar, and then we’d build on that, bringing the rhythm section in next. They played live in the room. And we overdubbed on top of that.

VL: It’s a really organic record. Even though we had the capability to use all the bells and whistles and smokescreens that ProTools can offer, we didn’t want that. We wanted it to be more like in the analog days, where what you got is what you got. Instead of using Autotune, we’d…do it again. [laughs]

BK: that’s the thing about Autotune and such: you can use them to “fix” things and make them “perfect,” but they leave fingerprints of their own.

VL: And we didn’t want those kinds of fingerprints; we wanted it to be real: representative of what we are and how we sound. And we wanted to be able to recreate those sounds live.

VD: Everything you hear on Bloody Cupid was played and sung as you hear it. We used real instruments, real drums, real string players. There are no synthesizers of any kind on the entire record.

BK: Speaking of that, I like the way you introduce instrumentation based on the needs of the song, as opposed to limiting yourselves to one set of instruments for the whole album. The best example is the great trumpet part on “I Don’t Want to Need This.” Was that part in your head from the beginning of writing the song, or did the idea develop later?

VL: When we were originally doing that song, it had such a mood to it. And we knew we wanted to keep it mysterious and dark. Mark Franklin was the perfect guy to call in; he’s got great chops, and he’s so good at improvising. So we did have an idea for it, but we weren’t sure initially if it was going to work.

VD: That song is very sparse. It’s one guitar, bass, drums, the trumpet, and vocal. And I wanted to keep it sparse to give it atmosphere. We didn’t have a trumpet part written out; Mark came in and improvised that part. And he did it in no more than an hour.

And that’s true for all of the solos on this record; nothing was worked out ahead of time. Even the drummer and bass player; they came in and learned the tunes “on the floor.” They came up with their parts along with us.

VL: There are some really world-class players on this record, and we wanted their spontaneity. We wanted them to feel it, and play what they felt.

VD: The spontaneity is a big part of it: we provide a framework, but what goes on top of it – the elaborations on that original concept – have got to be spontaneous.

BK: Van, you’ve collaborated with other musicians before. I can guess the answer to this very leading question, but what is different about making music with Vicki?

I’ll tell you the difference. I have written with a few people before, and had a great connection with them. It’s probably been less than five people, total, in my entire career. But this time it’s really different, because we have a connection on a lot of levels, creatively. And it’s just really, really easy. We respect each other so much, and we were big fans of each other before we ever started working together. And it’s really an equal partnership.

VL: There’s not a lot of people with whom you can feel really, really free to express your ideas. We just have a very open exchange. That’s the beauty of it.

LovelandDuren have live dates scheduled primarily in the Memphis area, but are looking into opportunities beyond the region. Bloody Cupid is available from the band’s website www.lovelandduren.com, and through Amazon, iTunes and other retailers.