Though his major-label introduction to the rock world was as drummer for Mr. Mister, Pat Mastelotto’s résumé would subsequently include a staggering list of credits in a dizzying array of different projects. His work with King Crimson – as part of the renowned “double trio” configuration (on and off since around 1995) is perhaps his most well-known gig, but this busy percussionist is seemingly everywhere. I first met and interviewed him on the “Two of a Perfect Trio” tour (that aggregation has since renamed itself The Crimson ProjeKct). Recently I talked with him about Deep, the latest album from Stick Men, a power trio of sorts featuring Markus Reuter and Tony Levin along with Mastelotto. – bk 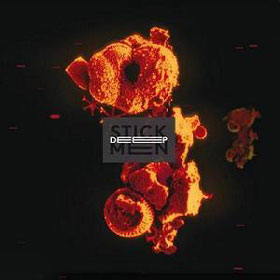 Bill Kopp: The relationship between percussion and bass guitar is pretty well understood. How does that relationship change – from your point of view – when you’re working with a Chapman Stick player?

Pat Mastelotto: Aha…that’s a pretty darn good question! The first thing that’s a big, big difference is, the Stick is so percussive. The attack – a lot of times on recordings – it sounds like the kick drum. It’s got so much punch, and there’s just a different center to it. So it works in [a drummer’s] favor, I think, to simplify your kick drum pattern. Because on a lot of those 16th-beat faster Stick parts, the sounds clash! (giggles)

And then you’ve got the whole thing that the rhythms Touch style Player gravitate towards, by playing hand to hand, seem more in line with the drummer’s thinking. In terms of stickings, or “handings” (laughs) or whatever you might call ’em. Not so much the finger-tapping, but more the rudimental building blocks below the fingers.

BK: I hadn’t thought about the percussive nature of the Stick until you mentioned it, but now I can definitely hear that…

PM: Oh, yeah. It’s like having another bass drum player in the band. Y’know, when me and Bill [Bruford] play together, or Gavin [Harrison] or Tobias [Ralph of Two of a Perfect Trio, all percussionists] play together – or anybody – we try to really simplify our kick drums most of all, and limit the unison parts. And yet when you’re trying to play with a Stick player…it’s really tough to do.

And I can tell you a couple more things that come to mind right away. When you play with a bass player, he usually looks at you! Bass players turn toward drummers and groove. But Stick players look down (laughs). So all I see are backs of necks. These touch guys, it’s a whole different thing. I tend to do that a lot myself; playing with my ear more than my eyes, especially with Markus [Reuter]. Even if he’s on another instrument, he is of that nature: no clues. You don’t look – or telegraph things – even to help your bandmates! (laughs) You just turn away and think, “[the other guy] should be able to do it blindfolded.” 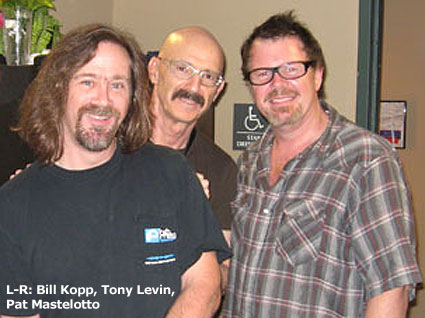 BK: How did the nature and sound of Stick Men change once Markus joined?

PM: No offense to Mike [Bernier], but it became much more consistent. Mike was a bit of a wild card. He played brilliant, just brilliant. But he played by ear. And sometimes – and an example – on a song that he’d start, he’d start it in a different key every night. (chuckles) He might have heard a different tonal center at that moment, and off he went. So after we’d finish, later that night, I’d say to Tony [Levin], “Tony, you never played the low part.” And he’s day, “I couldn’t! Mike was in another key, so I had to transpose.” Since I’m playing drums, I don’t think about that “key” thing.

And then there’s the whole flavor of songwriting in the band. Mike added a fusion-y element to the band, that sort of Mahavishnu kind of element. And Markus is very different from that. I don’t know how to describe it; he’s more stark…well, I’ll leave it to you guys to describe it.