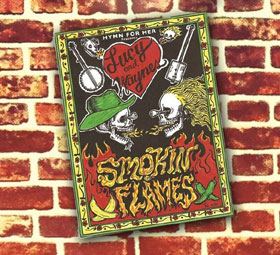 Rock’n’roll doesn’t have a long list of successful male-female duets; at least not ones that, y’know, rock. Other traditions have done well with the duet format: Porter Wagoner and Dolly Parton, Johnny Cash and June Carter Cash, the one-off Frank and Nancy Sinatra duet, and others. But when it comes to hard-driving rocking, there just haven’t been many of note. Perhaps the best of the sixties was Jefferson Airplane‘s Marty Balin and Grace Slick. Try as I might, I can’t think of a single rocking duet act from the 70s (and no, Donny and Marie Osmond do not count). In the 80s we were fortunate to have John Doe and Exene Cervenka of X.

And it’s that last duo who spring immediately to mind when I hear Lucy and Wayne’s Smokin’ Flames, the new album by Hymn for Her. The comparison isn’t perfect: Hymn for Her lean in more of a cowboy country direction than X did, but this music is pretty compelling, strong stuff.

The arrangements are quite spare; the songs were all performed live to the recorder. And the instrumentation echoes another well-known male-female outfit, The White Stripes. But the dozen songs on Lucy and Wayne’s Smokin’ Flames rock with malevolent glee in a way that Jack and Meg White didn’t always achieve, and – more importantly – when I listen to these tracks, I don’t think to myself, “Boy, this act could really benefit from a bass player, and maybe even a keyboardist.” In fact, the instrumentation – wiry acoustic guitar, distorted electric guitar, and lots and lots of foot stomps – serves these songs in such a good way that embellishing them further would take away from their power.

On “Trash the Sun,” the duo engage in spoken dialogue, but Lucy Tight‘s vocals are run through a processor that makes them sound like an old land-line telephone. The lyrical nod to David Bowie‘s “Space Oddity” is clever in the extreme. Some of the tracks are manic blues numbers (“Rosa Parks Blvd”) and others evoke a windswept, southwestern desert vibe (“Landescape”). Rarely has a two-piece achieved so much emotion-laden musical texture with such basic instrumentation.

Tight and partner Wayne Waxing have a clear love (and facility) for wordplay: witness the title “Lucy Fur” (say it out loud and fast if you don’t get it). And while the music provides the backdrop for the lyrics, the music itself is interesting enough that one can ignore the words at will.

Just when you start thinking it’s going to be one nonstop hell-in-a-bucket ride, the duo switch gear and deliver the lilting, fragile “Burn This.” And while I’m generally not a fan of the banjo, “Dark Deeds” – which sports an intro that features that instrument plus slide guitar – is quite effective, due in no small part to the loose-limbed duet vocals.

The disc ends with a left-turn: the torchy “Passion,” a number that spotlights the sultry, sexy vocals of Lucy Tight. When the song ends, you may be tempted to sit quietly for a moment to allow it all to soak in. Then, after a suitable pause, play the whole thing again. 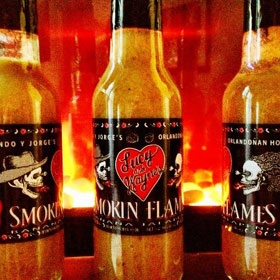 This album was crowd-funded using a Kickstarter program; that platform is rapidly becoming a viable means for financing all manner of creative projects (more related news on that in this blog very soon). An then right out of left field we have a tie-in product, a hot sauce concocted by the duo plus some Orlando friends. Based on a recipe that includes bananas(!), jalapeños and paprika, it’s unusual (to say the least) but delightful for those who like that sort of thing (and I do). It delivers quite a kick, which means that it pairs nicely with the music on Hymn for Her Presents Lucy and Wayne’s Smokin’ Flames.