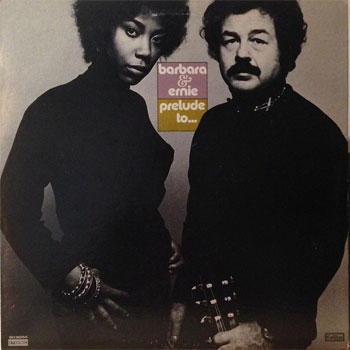 I truly admire the people at Real Gone Music. They continue to unearth music from ages ago that is in some cases long-cherished. In other cases it’s long-forgotten but worthwhile. And in yet other cases, the music never got much of a hearing to begin with; you can’t forget what you never knew.

And it’s into that last category that Prelude To… falls. Credited to Barbara & Ernie, it’s a 1971 one-off collaboration between Barbara Massey (vocals, keyboards and autoharp) and Ernie Calabria (vocals, guitar, electric sitar and some bass). Backed by some ace sessioners, the duo and their album sank pretty much without a trace, despite being on Cotillion (the same Atlantic Records subsidiary that released Emerson, Lake & Palmer‘s debut LP in the USA).

Though it’s credited as a duo, Massey’s voice is the most prominent instrument on the record. And she has quite a set of pipes. Not only can she sing whatever sort of material she wishes – ballads, soulful numbers – but her singular style means that she can sound like herself while strongly evoking other top-notch vocalists. The musically ambitious “Play With Fire” finds Massey sounding like some sort of cross between Grace Slick and Julie Driscoll. On the gentle, stately J.S. Bach-influenced “Prelude,” Massey sounds very much like Laura Nyro. And in other places she may remind listeners of Carole King or Karen Carpenter. And so on: witness “Listen to Your Heart,” in which she sounds uncannily like Elaine “Spanky” McFarlane.

Barbara & Ernie’s cover of Jefferson Airplane‘s (or The Great Society‘s, if we’re being picky) “Somebody to Love” is very much in the style of Driscoll’s work with Brian Auger; Massey’s finely-timed strums on autoharp will make you forget The Lovin’ Spoonful.

The players are certainly no slouches, either. Calabria’s subtle, jazzy guitar work on “Searching the Circle” is a delight, and the horn charts on that tune (and a few others) are subtle and thrilling at once. (Aside: I’ve read that “Searching the Circle” has been sampled for breakbeats and grooves on hip-hop tracks, but can’t tell you which ones.) And with orchestration by a pre-disco Eumir Deodato, this is one of those albums that rewards close listening.

Listening to this shortish album in 2013, the biggest mystery may be why it didn’t chart; everything about it: writing, singing, performance, arrangement, production – is exemplary, and it’s a varied (but not too varied) collection of songs. One supposes that the “just too much other good stuff at the time” argument might explain it. But thanks to Real Gone Music, the time for Barbara & Ernie’s Prelude To… is now. It’s a gem worth discovering.