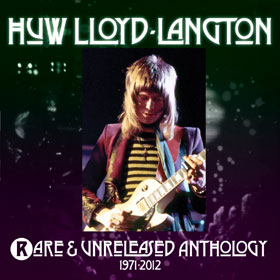 You could be forgiven if, upon seeing the cover of Rare & Unreleased Anthology 1971-2012 for the first time, you chuckled and thought it sported a photo of Spinal Tap‘s Nigel Tufnel. Huw Lloyd-Langton‘s golden tresses may well have served as the inspiration for Christopher Guest‘s immortal character. But this compilation – actually in the works before Lloyd-Langton’s untimely death on December 6, 2012 – is a nice survey of best-of and gap-filling material from the former Hawkwind guitarist.

The first disc includes twenty-one cuts, many of which feature Lloyd-Langton on solo acoustic guitar (with a bit of electric guitar overdub). These are clearly demos; there’s little in the way of sonic variation, and it’s likely that all the tracks were cut at a single seating in 1971. But there’s a homespun charm that gives the tracks a feeling quite similar to the demos Badfinger‘s Pete Ham cut around the same time. “Sleep” sounds like the sort of thing Pink Floyd might have cut for the Zabriskie Point soundtrack; pastoral textures were all the rage for hard rockers in those days.

The 1973 cuts from the band Magill rock a good bit harder, but feature some very mannered warbling that sounds halfway between David Bowie at his most strident and, say, Uriah Heep‘s David Byron. A country-flavored “Feed Your Friends With a Long Handled Spoon” feels like bandwagon jumping, but it’s fun nonetheless.

Five cuts from a band called Jawa (1979) show a band reasonably in step with the prevailing late-period boogie-rock sounds of the era, but the fidelity is pretty poor, suggesting these were cut to cassette. It’s a “Damn Shame,” since these rank among the most interesting songs on the collection. The first disc wraps up with a 1999 track from The Lloyd-Langton Group (clever name, eh?) recorded – but not used – for a Hawkwind tribute album. Honestly, the desultory, anemic performance answers the question as to why it went unused.

The second disc is a thoroughly different affair. Focusing on Lloyd-Langton’s skills as a guitarist (as a singer, he’s only adequate), half of the disc is a survey of instrumental tracks from his various albums in the 1980s onward. “Alien Jiggers” is a full rock ensemble piece from 1985, and it’s tuneful, rocking, accessible stuff some might find reminiscent of Camel at their least progressive. Some of the 80s stuff suffers from gated-reverb drums and other period trappings, but Lloyd-Langton’s guitar work often raises the level enough to forgive such transgressions. His polished acoustic work here (as opposed to the demos on the first disc) is also lovely. The disc concludes with a half dozen “new” acoustic guitar instrumentals (again, sometimes with electric overdubs), likely intended as demos or basic tracks for a project that, sadly, Lloyd-Langton would not live to finish. Here – especially on “Fragile Journey” – he sometimes sounds like Jimmy Page circa Led Zeppelin III; these tracks are highly recommended.