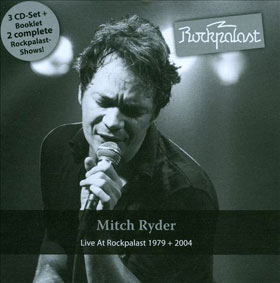 Mitch Ryder is a tricky figure to pin down. Though he enjoyed a brief string of hits in the mid 60s (first with the Detroit Wheels and then as an ostensible solo artist), by the end of the 60s, the commercial marketplace had pretty much made its decision: his career was over and done. But nobody told Ryder (born William Levise). Though largely silent (on record, at least) between the release of 1971’s Detroit and his “comeback” around the end of that decade, Ryder has amassed a staggeringly deep catalog; at last count he had no less than two dozen albums of material released under is own name.

Good luck finding more than a few of those records, however; Ryder has never gotten much traction in the USA with his music; what commercial success he has had stateside has mostly been on the oldies circuit, something for which he has professed little love.

Those who haven’t heard him may be surprised to hear that his vocal style and onstage mannerisms are a sort of cross between Little Richard and Robert Palmer (he even looks a bit like the latter, though Ryder’s older and still among the living). Unlike much of the oldies-circuit ilk, Ryder is a hard-charging soul rocker.

Ryder’s solo career differs from his Detroit Wheels period in an important way: he writes the lion’s share of his own material, and when he does cover another artist (which he does with some frequency), he makes the songs his own. A pair of new (albeit archival) releases showcases all of Ryder’s stragneths.

Fresh into the aforementioned comeback, in 1979 Ryder took to the stage for German television’s WDR, at Grugahalle Essen. On this disc, with a set that’s in turns rocking, soulful and funky, Ryder and his band tear through songs from his then-current album Naked But Not Dead (like Lee Hazlewood, Ryder has long had a penchant for off-the-wall, inscrutable, in-joke album titles) and a well-chosen assortment of covers. The band is in top form, and rocks a helluva lot harder than one might expect. It’s a no-compromise set, though Ryder and band do allow eight minutes worth of nostalgia by burning through his two Wheels-era medleys (“CC Rider / Jenny Take a Ride” and “Devil With a Blue Dress On / Good Golly Miss Molly”). But in the end, Ryder seems more interested when he’s leading the band through a twelve-minute reading The Doors‘ “Soul Kitchen.”

By that time in Ryder’s career, it must have already dawned on him that he was something of a prophet without honor in his homeland, beginning around this time, his efforts and successes would be centered on the European continent (this focus remains true today, as he explained in my 2012 interview with him).

So it’s little surprise that Ryder would return to the German stage many more times. In 2004, some of the same personnel involved in making his 1979 concert broadcast possible put together another show. This one ran a bit longer, and while it included those same two medleys (even a non-commercial artist like Ryder knows he has to deliver those for the punters, and he does so well), the set still offered up his trademark mix of then-current self-penned originals and covers that were near and dear to his heart. (And he still closes the set with the Doors tune.)

Peter Rüchel of the German TV show Rockpalast penned the relatively brief liner notes for this set, which is avaialble in tow configurations: a 3CD box containing both concerts, and a 2DVD set with the same material plus a notorious 1979 pre-show interview with Ryder. (That roaringly drunk interview is ominously mentioned in the liner notes, which will make its absence on the CD version a bit frustrating for consumers.)

Seeing and hearing this music may well make one wonder why Ryder hasn’t enjoyed some measure of success; what he offered in 1979 was every bit the equal of other stars who made the bigger time (e.g. John Mellencamp, briefly an ally/patron of Ryder’s). And in 2004 he still delivered the goods, even when working with an aggregation best described as a pickup band.

Those looking for some undiscovered straight-ahead rock’n’roll – and/or those who enjoy Ryder’s music but sometimes find his studio efforts a bit wanting – will enjoy either of these sets.