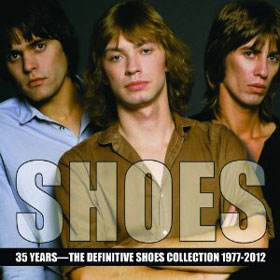 As Shoes bassist John Murphy told me in our wide-ranging four-part interview, the new 21-cut compilation on Real Gone Music, 35 Years: The Definitive Shoes Collection 1977-2012 is “is a sort of Part Two to Shoes Best,” the 1987 collection released on Shoes’ own Black Vinyl Records. That’s about right; assuming one doesn’t plan to (or hasn’t yet) picked up all of the albums in Shoes’ catalog, those looking for a solid overview will probably want both.

And I’d take slight issue with the compiler’s user of the word definitive. Any Shoes collection that leaves off “I Don’t Miss You” by definition falls short of that term. But what 35 Years is, is a terrific overview. Drawing from all of the group’s albums except their early effort One in Versailles and their 1995 live set Fret Buzz, 35 Years culls the winningest tracks from their consistently-engaging body of work.

Shoes’ musical vision was established early; there’s not a world of difference in music approach, lyrical subject matter or production style between the big-budget major-label cuts from Present Tense (representing nearly a fourth of the material on 35 Years) and “Say It Like You Mean It” from their 2012 return, Ignition. But that’s not a band thing: the Zion, IL group figured out the best means of getting their powerpop songs across, and when it works – which is most all of the time – it works remarkably well.

The brothers (John and Jeff Murphy) and Gary Klebe each have their own vocal personality, thus imbuing their songs with the personality of the lead singer on each track. But the vocal blend – partly that ineffable brothers thing; see also: the brothers Gallagher, Davies, Everly and so on – adds a special something, a Shoesiness if you will. The timeless quality of their songs is only occasionally betrayed by a dated element (a spot of electric sitar, or gated reverb on the drums, for example), but Shoes have always been far less guilty of trendiness than their contemporaries, so 35 Years can be listened to with unabated pleasure, and not the guilty kind.

I’m not sure if it’s been remarked upon elsewhere, but viewing the song titles in Shoes’ catalog as a whole reveals a subtle penchant for in-jokes. At least that’s what I see when I view titles like “I Miss You” and “I Don’t Miss You,” and “Too Late” and “Too Soon.” But who knows: maybe that’s all coincidence.

There aren’t any rare or unreleased Shoes tracks on this set, nor is including such part of the compilers’ goal here. What that means in practical terms is that the softer Propeller version of “A Thing of the Past” is included rather than the harder-rocking (and, I say, better) version that appeared on the various-artists Yellow Pills Vol. 1. But nay self-respecting powerpop fan will have tracked down that now-rare comp in any event.

Steven “Spazz” Schnee (yeah, I don’t know either) has penned a good overview of the band’s career, and quotes from all three Shoes provide that all-important they-were-there angle.

As far as value-for-money, 35 Years: The Definitive Shoes Collection 1977-2012 can’t be beat. Perfectly balancing the sweet and sour, the rocking and melodic, jangle and crunch, Shoes’ oeuvre is a high point of its genre. And 35 Years is a succinct, hour-plus look at it.