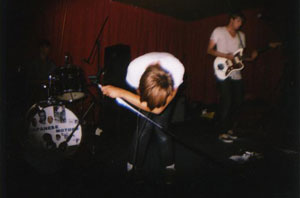 A quick listen — heck, even a careful, critical series of listens — to “Single Fins & Safety Pins,” the latest single from Japanese Motors, would give most people the clear impression that the band owns a well-worn copy of the (apocryphal) Noo Yawk Song and Stylebook authored by members of The Strokes and the Velvet Underground. Lyrics aside, the song bears the unmistakable effects of hours spent listening to Lou Reed and his fellow NYC-based rock acts.

In fact Japanese Motors are based in Orange County CA, an area known for Disneyland, a particular brand of conservative politics, and a somewhat violent strain of hardcore punk. None of which, it would seem, have exerted much influence on Japanese Motors. The band — fronted by pro surfer (people get paid to surf?!) Alex Knost — plays a fairly straightforward style of rock. Unlike Vice Records label mates the Black Lips or King Khan & the Shrines, Japanese Motors don’t carve out a really strong identity: they play their songs, and that’s about it.

Which isn’t necessarily a bad thing. On an unseasonably warm March 2009 night in Raleigh NC, the band played one in a string of opening slots for Modest Mouse. The Raleigh date was one of the few that hadn’t sold out, though the venue (the Disco Rodeo) was pretty well packed. And while it’s safe to assume that most of the several thousand concertgoers showed up to see Modest Mouse, the OC four-piece got a welcome reception.

The group’s thirty-minute set showcased their no-nonsense approach: Fender blasts of rock (both guitarists and the bassist sported Fender equipment; one suspects that if Fender drums were available, they’d have those as well). The quartet barreled through their mostly three-minute tunes with aplomb, and worked that audience as well as any third-down-on-the-bill act could be expected to do.

Knost alternated between playing his guitar and hanging on the mic stand; though this is in no way meant as a slam on his guitar ability (he’s fine, really), the songs on which he hung up the axe and just sang seemed to work a bit better. Perhaps given the freedom from playing allowed him to put more of himself into his vocals.

My concert companion (ok, my college-age daughter, something of a music journo herself, as evidenced here, here and here) suggested that when the group wasn’t channeling the Strokes (which they really only do on “Single Fins”) they bring to mind Suicidal Tendencies; this was especially true on the half-spoken part of some of their songs. To this reviewer, presentation-wise, Japanese Motors come off a bit like the Stooges stripped of their menace. With a self-titled full-length and the new digital-only Perception of Reality EP the sum total of their recorded catalog, this group shows promise.