Bonnaroo 2007: It’s Not Just for Hippies Any More

A sell-out crowd of 80,000 descended on a barren 70-acre tract in middle Tennessee (halfway between Nashville and Chattanooga) for the Bonnaroo Music & Arts Festival, one of the world’s largest and most successful festival enterprises. This year’s lineup of bands for the four-day event (June 14-17) was more varied than in previous years, with less reliance on the jamwankery that is often a hallmark of outdoor festivals. 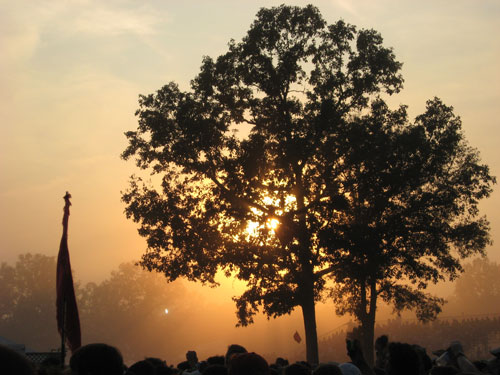 The reunited Police were arguably the highest-profile act on the bill. The tightly-coiled arrangements of the group’s work in the 80s were replaced at Bonnaroo with a looser, exploratory approach. This may have satisfied the jam-band fans that once formed the core of the festival’s attendees, but it left those familiar with the Police’s music scratching their heads and heading off to catch the Flaming Lips’ stunning “sound check” performance of Black Sabbath’s “War Pigs.” Meanwhile, Police vocalist Sting took a huge page from the Frank Sinatra stylebook, tweaking both vocal phrasing and lyrics of Police standards, sometimes to the point of “what song is that?” territory. While attendees new to the Police’s body of work may have enjoyed the aired-out revisions of the trio’s songs, long-time fans could be forgiven for feeling that the songs were somehow stripped of their energy and power. And despite the fact that the group had been contracted to play for two and a half hours, they exited the stage some fifty minutes early, presumably heading straight to the late-night deposit window at their bank’s Manchester TN branch.

Festival conditions were brutal, or at least seemed so to the overwhelmingly white, college-age, middle-and-upper-class crowd. Omnipresent dust clouds were so thick that by the second day, many attendees (and a high percentage of festival workers) sported face-covering bandannas, giving the drought-parched middle Tennessee grounds a vaguely “wild west” look. Drugs were in ample supply (it became an amusing game to predict how long one would have to wait between being accosted by a dealer muttering “mushrooms, mushrooms”), and as early as Thursday midday (around which time the music actually started) some people could already be found passed out and baking in the sun. By Sunday, stepping over unconscious bodies became a full-time endeavor.

Oddly, for a festival that seemed to be so well run (a word on the only real misstep in a moment), the presence of official staff was minimal, or, more likely, subtle. While attendees did get up close and personal pat-downs and bag searches from workers wearing shirts emblazoned with the word SAFETY (which seems so much…cooler…than SECURITY) as they lumbered through checkpoints, Bonnaroo seemed largely free of “adult in charge” types and, significantly, uniformed law enforcement officials.

There were visible police in some camping areas; red-outfitted cops on horseback patrolled, and their horses did their part to add to the stench and walking hazards. Mostly the equestrian force stood around chatting among themselves, but a few seemed intent on making sure that the goings-on in a body-painting tent (well outside of Centeroo, it must be noted) did not get out of hand; they kept a close watch as a young woman was covered in green paint. Missed a spot there. Your tax dollars at work, folks.

The comedy tent — officially dubbed Yet Another (Comedy) Tent — boasted a trifecta of must-see acts: a set headlined by David Cross, one led by Lewis Black, and another by New Zealand’s Flight of the Conchords (their new HBO show enjoyed a sneak-preview in the Cinema Tent). Lines were long — and I mean looong — and this was the one area where the “nobody in charge” atmosphere worked against the crowd. For the Cross-led show, lines snaked outside well into the darkness, and with multiple lines, everyone thought they were in the “right” one, only to find out (after as much as two and a half hours of waiting) that they were wrong. Gate-crashing and bad vibes were the result, as thousands of dust-covered attendees vied for a limited number of seats in the nominally air-conditioned tent. For most, must-see turned into didn’t-see.

Porta-johns were ample, well placed (in other words close but not-too-close to this reporter’s tent) and regularly serviced; the sludge-sucking trucks were a constant feature of Bonnaroo, and concertgoers often had to leap out of the way to avoid being bumped by the in-a-hurry drivers. Temperatures hovered around 90°F (and that was in the shade, assuming such an elusive thing could be found at the festival) and save for a ten-minute downpour on Friday, the weather was hazy and dry. A “dust devil” (sort of a mini-tornado) ripped through camping section 9 on Friday, sending at least one tent some 65 feet into the air, in a psychedelic reenactment of a scene from The Wizard of Oz (sadly, Roger Waters was not in attendance to sync Dark Side of the Moon to the event). This phenomenon was — like many Bonnaroo spectacles — caught on amateur cell phone video. 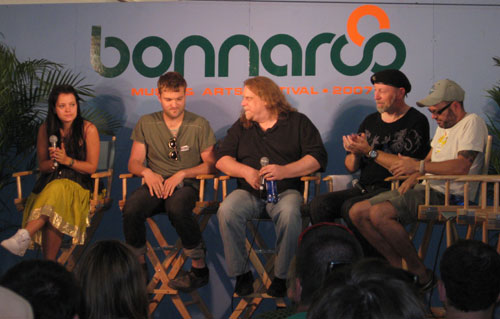 Speaking of which…at a press-only Q&A session, an Esquire reporter pointed out to ska/pop tart Lily Allen that her “every move will be documented on somebody’s blog,” and asked how that might affect her performance. “That’s why I won’t be drinking,” she replied, evidently joking; during her set, she swigged often from a bottle of Jägermeister, and went out of her way to call attention to it.

On Saturday night, The Flaming Lips put on a set that — while essentially the same show they’ve been doing for years — managed to capture the essence of what a festival should be all about. Blessed by darkness and the cooler temperatures it brought, the Lips put on an audiovisual tour-de-force, and songs were interspersed with lots of talk from charismatic frontman Wayne Coyne. Wayne reminisced about the last time the group played Bonnaroo (2003), pointing out that at that time the crowd seemed united in its “hatred of George W Bush” (images of whom were pointedly flashed on a giant screen during “War Pigs”) and wondered aloud how we have allowed ourselves to get into the mess in Iraq. In one of the festival’s most poignant moments, Coyne told a story about the new electronic bugles the Army has been forced to issue; it seems that with so many soldiers dying, there aren’t enough trained bugle players to play the funeral “Taps” in the field. The electronic bugles allow an amateur to play the song in honor of fallen men and women. With that, Wayne produced such an instrument, and played “Taps” before a hushed, somber crowd, following immediately with a tear-eliciting rendition of “Waitin’ for a Superman” from The Soft Bulletin. 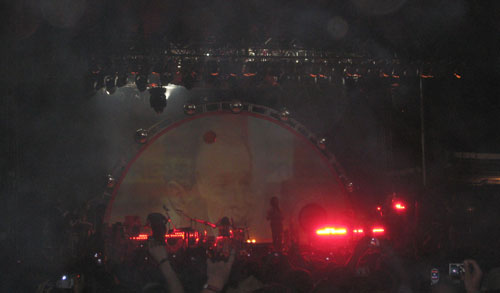 The list of performers went on and on: the top tier included Tool, Widespread Panic, Kings of Leon, Wilco, The Roots, Ziggy Marley, Ratdog and the aforementioned Police (among others). The late-night slot, though dominated by The Flaming Lips, included red meat for the noodle-dancing crowd (String Cheese Incident) and a backdrop for the pharma-fans (Sasha and John Digweed). Nearly every genre of music was covered; for country and Americana one could see and hear the Hendrix-meets Ernest Tubb shtick of Junior Brown. For world music, there was the entrancing Haale; for intelligent and off-kilter pop Bonnaroo featured Fountains of Wayne, Regina Spektor and The Whigs. Franz Ferdinand and Pete Yorn both turned in top-notch performances. Even hip-hop — not generally a festival staple — got exposure via Galactic and The Roots. (Relatively) hidden gems included performances by Alexa Ray Joel and Paolo Nutini, though no act faced the indignity of a sparse audience.

For those with a sense of history and taste there were Ornette Coleman, Hot Tuna and Richard Thompson, all situated in The Other Tent (jokingly dubbed the “obscure has-been tent” by a smiling Thompson, clearly glad to be there).

The final day saw The White Stripes on the Which Stage; their overwhelming popularity (coupled with the lack of another super-high-profile act scheduled opposite them) meant that crowds became, for once, unmanageable. If one made it this far through Bonnaroo without being vomited on, knocked over, or bathed in warm beer, this was the point at which some (or all) of that changed. As the dust clouds filled the air to a height of some thirty feet, the Stripes cranked out their set (with a sprinkling of new tunes) to the delight of way-too-fucking-many people. 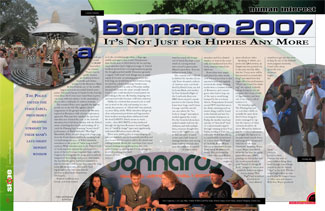 No festival would be complete without the obligatory “surprise” collaborations and onstage walk-ons. The most high-profile of these was the omnipresent John Paul Jones (who hit the stage with at least three acts), and the most notorious was Lewis Black joining Gov’t Mule (where a fan welcomed Black to the stage with a bottle to the head). But the most pleasing pairing was Mavis Staples joining the Decemberists (who put on a winning and very well-received set) for an ace cover of The Band’s “The Weight”; it looked like everyone there knew the words, and sang along. For a few moments, in the hot, dusty, bone-dry, stinky, filthy cow pasture, seemingly everyone in the crowd was one. It was beautiful.

(more photos below. ALL photos on this page © Bill  Kopp.) 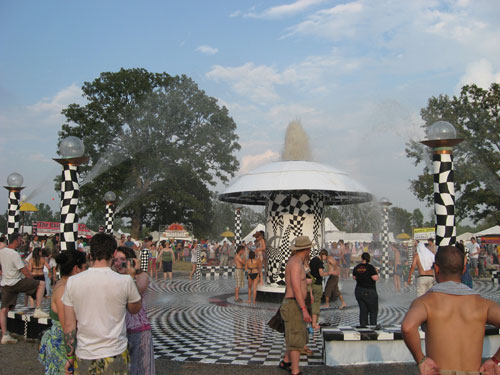 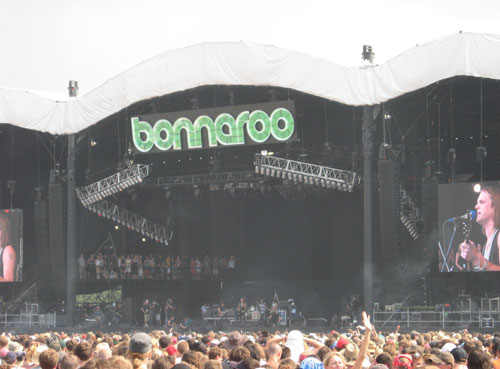 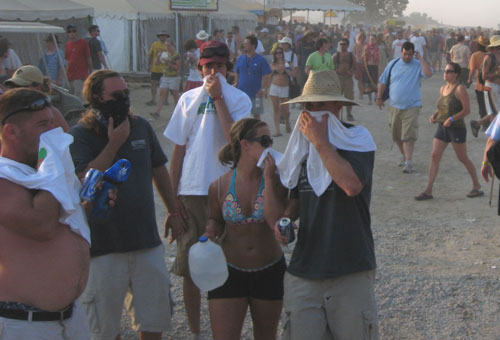 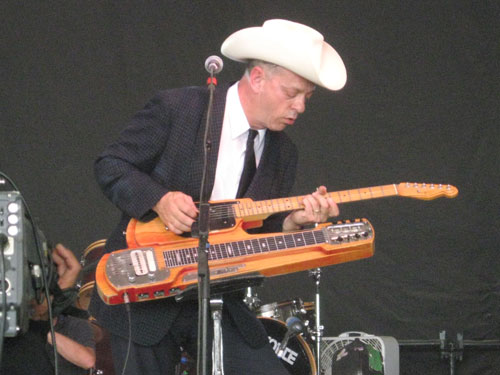 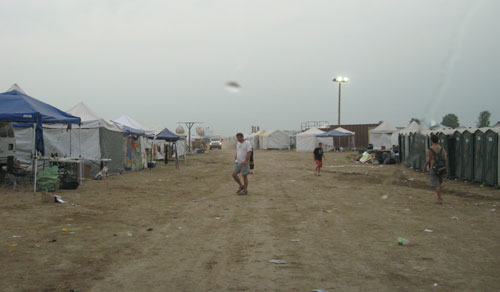