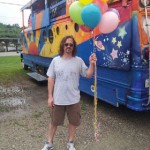 Note: For this, my 1500th blog entry, I’m taking a look back in time. The events described herein took place more than a year and a half ago, so please […]
Read More
Continued from Part Three… Bill Kopp: Speaking of playing onstage, how do the live pieces differ from the studio versions? Do you open them up for improvisation, or are they […]
Read More
Continued from Part Two… Bill Kopp: This is an obvious thing to say, but since instrumental music has to convey its messages without the benefit of lyrics, it has to […]
Read More
Continued from Part One… Bill Kopp: A Tribute to Jack Johnson is among the most underrated of all Miles’ works, I think. John McLaughlin: A lot of people don’t underrate […]
Read More
Far be it from me to attempt to introduce John McLaughlin. One of the world’s greatest guitarists, his career has spanned five decades. His latest album Now Here This is […]
Read More
A sell-out crowd of 80,000 descended on a barren 70-acre tract in middle Tennessee (halfway between Nashville and Chattanooga) for the Bonnaroo Music & Arts Festival, one of the world’s […]
Read More