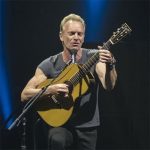 Thinking back upon the subject today, it doesn’t seem so surprising that Sting cut his musical teeth in a jazz fusion band. As bassist in Last Exit, the British musician developed and displayed his keen abilities on bass and vocals. But by 1977 he had focused his energies in a very different style, the reggae-influenced
Read More
A sell-out crowd of 80,000 descended on a barren 70-acre tract in middle Tennessee (halfway between Nashville and Chattanooga) for the Bonnaroo Music & Arts Festival, one of the world’s largest and most successful festival enterprises. This year’s lineup of bands for the four-day event (June 14-17) was more varied than in previous years, with
Read More