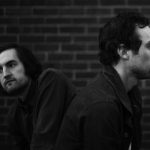 Airpark grew out of the ashes of Apache Relay, a Nashville-based folk-rock group that released three well-received albums. Brothers Michael Ford Jr. and Ben Ford left the group to make music in a more modern style. Michael Ford says that – in contrast to Apache Relay’s lush, multi-instrumentalist sound – minimalism is the guiding principle
Read More
There’s a never-ending stream of new music, so it’s time once again for some hundred-worders to work off some of my backlog. As always, these all deserve full reviews, but with limited time and resources, 100 words will have to do. I’ll cut to the chase. Today it’s a wide assortment of music, from rock
Read More